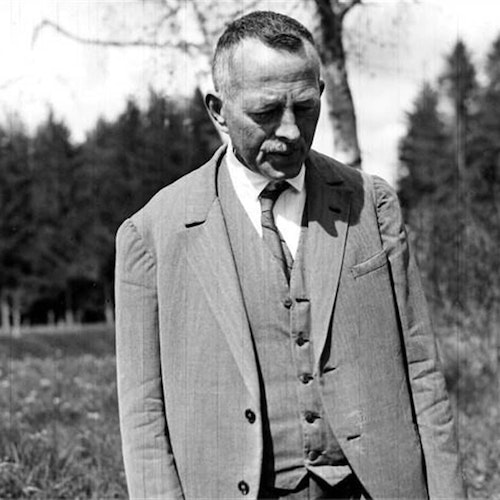 Born in Switzerland in 1878, Robert Walser worked as a bank clerk, a butler in a castle and an inventor's assistant while beginning what was to become a prodigious literary career. Between 1899 and his forced hospitalization in 1933 with a now much-disputed diagnosis of schizophrenia, Walser produced as many as seven novels and more than a thousand short stories and prose pieces. Though he enjoyed limited popular success during his lifetime, his contemporary admirers included Franz Kafka, Hermann Hesse, Robert Musil and Walter Benjamin. Today he is acknowledged as one of the most important and original literary voices of the twentieth century, his work the subject of essays by W.G. Sebald, J.M. Coetzee, William Gass and Susan Sontag. Describing his own work, Walser wrote: “My prose pieces are, to my mind, nothing more nor less than parts of a long, plotless, realistic story. For me, the sketches I produce now and then are shortish or longish chapters of a novel. The novel I am writing is always the same one, and it might be described as a variously sliced-up or torn-apart book of myself.” In the latter years of his career, Walser struggled with a paralyzing writer's cramp that he combated by composing his texts in a miniscule pencil script written on small slips of paper that he carefully cut to size. This handwriting was so small that his guardian Carl Seelig mistook it for a sort of secret code. After his death in 1956 while out on a solitary walk, a collection of these papers were found among his belongings and preserved, but many years passed before they were transcribed and published.

A Celebration of Robert Walser at the New Museum

A Q & A With The Quay Brothers 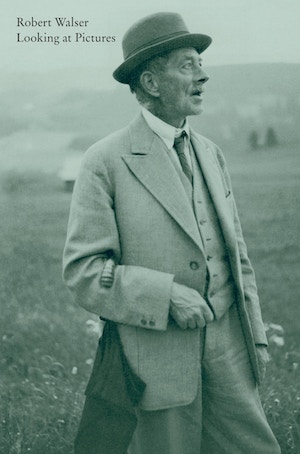 An elegant collection, with gorgeous full-color art reproductions, Looking at Pictures presents a little-known aspect of the eccentric Swiss writer's genius. His essays consider Van Gogh, Manet, Rembrandt, Cranach, Watteau, Fragonard, Bruegel, and his own brother Karl. The pieces also discuss general topics such as the character of the artist and of the dilettante as well as the differences between painters and poets. Each piece is marked by Walser's unique eye, his delicate sensitivity, and his very particular sensibilities—and all are touched by his magic screwball wit.…
More Information
Your Independent Bookstore Barnes & Noble Amazon 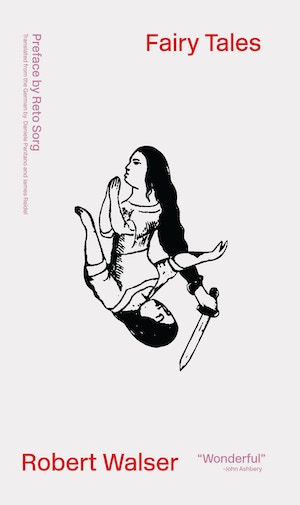 Translated from the German by James Reidel Daniele Pantano

With a contribution by Reto Sorg

Fairy Tales gathers the unconventional verse dramolettes by the Swiss writer Robert Walser. Narrated in Walser's inimitable, playful language, these theatrical pieces overturn traditional notions of the fairy tale, transforming the Brothers Grimm into metatheater, even metareflections. Snow White forgives the evil queen for trying to kill her. Cinderella doubts her prince and enjoys being hated by her stepsisters; The Fairy Tale itself is a character who encourages her to stay within the confines of the story.…
More Information
Your Independent Bookstore Barnes & Noble Amazon 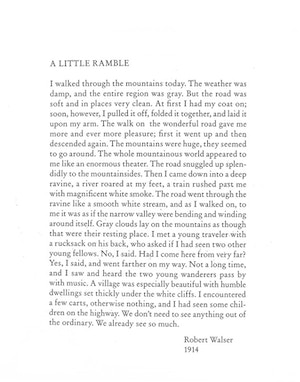 A Christine Burgin co-publication A Little Ramble: In the Spirit of Robert Walser is a project initiated by the gallerist Donald Young, who saw in Walser an exemplary figure through whom connections between art and literature could be discussed anew. He invited a group of artists to respond to Walser’s writing. A Little Ramble is a result of that collaboration.The artists have chosen stories by Robert Walser as well as excerpts from Walks with Robert Walser, conversations with the writer recorded by his guardian Carl Seelig.…
More Information
Your Independent Bookstore Barnes & Noble Amazon 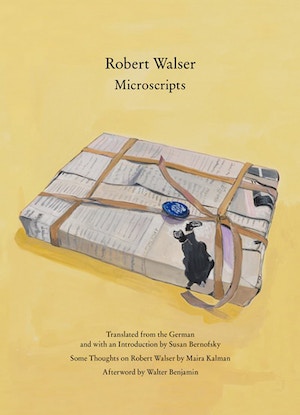 With a contribution by Walter Benjamin

A Chirstine Burgin co-publication Now in paperback, with newly translated, additional microscripts and full-color paintings by Maira Kalman. Robert Walser wrote many of his manuscripts in a highly enigmatic, shrunken-down form. These narrow strips of paper (many of them written during his hospitalization in the Waldau sanatorium) covered with tiny ant-like markings only a millimeter or two high, came to light only after the author’s death in 1956. At first considered a secret code, the microscripts were eventually discovered to be a radically miniaturized form of a Germanic script: a whole story could fit on the back of a business card.…
More Information
Your Independent Bookstore Barnes & Noble Amazon 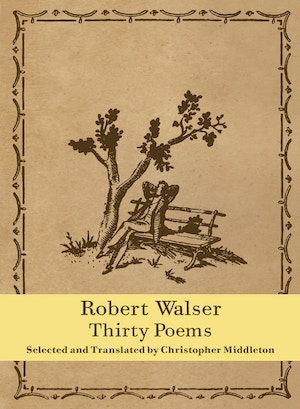 Translated from the German by Christopher Middleton

With a contribution by Christopher Middleton

A Christine Burgin co-publication In a small, exquisite clothbound format resembling the early Swiss and German editions of Walser’s work, Thirty Poems collects famed translator Christopher Middleton’s favorite poems from the more than five hundred Walser wrote. The illustrations range from an early poem in perfect copperplate handwriting, to one from a 1927 Czech-German newspaper, to a microscript.
More Information
Your Independent Bookstore Barnes & Noble Amazon 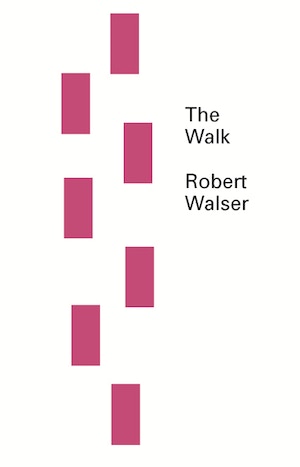 Translated from the German by Susan Bernofsky Christopher Middleton

With a contribution by Susan Bernofsky

A pseudo-biographical “stroll” through town and countryside rife with philosophic musings, The Walk has been hailed as the masterpiece of Walser’s short prose. Walking features heavily in his writing, but nowhere else is it as elegantly considered. Without walking, “I would be dead,” Walser explains, “and my profession, which I love passionately, would be destroyed. Because it is on walks that the lore of nature and the lore of the country are revealed, charming and graceful, to the sense and eyes of the observant walker.…
More Information
Your Independent Bookstore Barnes & Noble Amazon 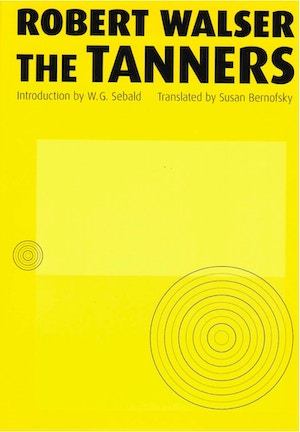 The Tanners, Robert Walser’s amazing 1907 novel of twenty chapters, is now presented in English for the very first time, by the award-winning translator Susan Bernofsky. Three brothers and a sister comprise the Tanner family — Simon, Kaspar, Klaus, and Hedwig: their wanderings, meetings, separations, quarrels, romances, employment and lack of employment over the course of a year or two are the threads from which Walser weaves his airy, strange and brightly gorgeous fabric.…
More Information
Your Independent Bookstore Barnes & Noble Amazon 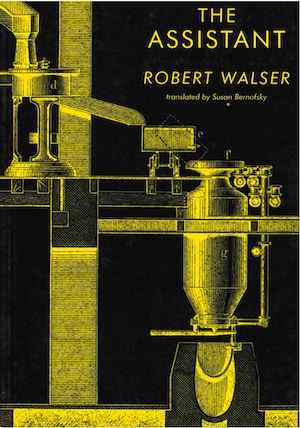 Robert Walser is an overwhelmingly original author with many ardent fans: J.M. Coetzee (“dazzling”), Guy Davenport (“a very special kind of whimsical-serious-deep writer”), and Hermann Hesse (“If he had a hundred thousand readers, the world would be a better place”). Charged with compassion, and an utterly unique radiance of vision, Walser is as Susan Sontag exclaimed “a truly wonderful, heart-breaking writer.” The Assistant is his breathtaking 1908 novel, translated by award-winning translator Susan Bernofsky.…
More Information
Your Independent Bookstore Barnes & Noble Amazon

This jeweled box of a book… float[s], wonderfully, somewhere in a land between short story and criticism.

He was the most courageous kind of eccentric, daydreaming at some doomed remove from the world yet able to conjure it up in his work, where it attains a warm and puzzling glow.

A Paul Klee in prose, a good-humoured, sweet Beckett, Walser is a truly wonderful, heartbreaking writer.

Everyone who reads Walser falls in love with him.

Walser achieved a remarkable tone, in which perfect assurance and perfect ambiguity combine.

If he had a hundred thousand readers, the world would be a better place.

Walser’s fictions are charged with compassion: awareness of the creatureliness of life, of the fellowship of sadness. He is a truly wonderful, heartbreaking writer.

One of the most profound creations and one that is enough on its own to explain why the most powerful of all writers was a favorite author of the merciless Franz Kafka.

One of the most profound creations and one that is enough on its own to explain why the most powerful of all writers was a favorite author of the merciless Franz Kafka.

A clairvoyant of the small.

Walser has in recent years regained some of the status he enjoyed in the 1920s. Instead of Kafka and Benjamin, we have Sebald and Lydia Davis championing him. But we still don't know where we stand with him. Are we dealing with pure literature, the vagaries of the everyday, jokes, or empty fancies? The writing is radical and elegant enough to encompass all these possibilities and many more. Is it the stuff of life? Perhaps.

The Walk is a good place to start reading Walser, and offers a kind of bridge between the novels and the microscripts…. The walk is a search for freedom, is an act of freedom itself, and the writing feels free to launch into invective, or drape itself in courtesy, as it pleases. It is an attempt to approximate writing to life, to subject it to circumstance and chance encounter, but for all its overt artificiality the story is deeply affecting.

It is no wonder that Walser has been so influential to artists and writers whose work is similarly charged with social criticism, examinations of the individual in relation to the world, and the attempt to fathom artistic inspiration.

Walser has in recent years regained some of the status he enjoyed in the 1920s. Instead of Kafka and Benjamin, we have Sebald and Lydia Davis championing him. But we still don't know where we stand with him. Are we dealing with pure literature,the vagaries of the everyday, jokes, or empty fancies? The writing is radical and elegant enough to encompass all these possibilities and many more. Is it the stuff of life? Perhaps.

The hope that shines forth in the moments of self-knowledge, transcendence, and grace Walser describes is anything but meager: on the contrary, it is exultation the writer feels when he perceives the sublime in the tiniest details of everyday life.

Walser’s project is mirrored and echoed by modernity’s general obsession with interiority and exploring new forms of subjectivity. We should understand Walser’s poetics of smallness as being as grandiose as anything that modernity has produced.

A clairvoyant of the small.

The incredible shrinking writer is a major twentieth-century prose artist who…can be placed in that comic tradition [that] runs form Gogol through Kafka and down to José Saramago…When Walser met Lenin in Zurich during the war, all he had to say was ‘So you, too, like fruitcake?'…It is remarkable to see what variety and richness, what easiness and charm, what winsome inanities and philosophical depths he could pack into half a page.

A major writer… A Paul Klee in prose –– as delicate, as shy, as haunted. A cross between Stevie Smith and Beckett.