Related books:
Be With

On your left, as you enter The Room, you immediately encounter the New Directions bookshelf designed by artist Brecht Wright Gander. There, on the second shelf from the bottom, some of the New Directions anthologies. The earliest one I have is Number Seven, from 1942 when, as James Laughlin tells us in his personalized contributor notes, Dr. William Carlos Williams has “laid aside the biography of his mother . . . in order to concentrate on his long poem, Paterson, which we hope to publish before too long.” Pierre Jean Jouve, whose work is also included, is described as “an interesting French poet whose work is too little known in America.” Ahh, sound familiar? What’s signally absent from my ND collection is a special, very limited edition of Thomas Merton’s love poems which I bought and inscribed one year for my wife on her birthday. It has disappeared. Irreplaceable.

Beyond a large window against which too many of California’s birds broke their necks (before I remedied the situation with stickers), this corner bookshelf (which like the two chairs and table, is also an early Brecht Wright Gander creation) holds a first edition copy of Ezra Pound’s Cathay, signed to his English Professor at The University of Pennsylvania. Pound’s daughter, Mary de Rachewiltz wrote me that she hopes it “will serve as ‘inspiration’ and ‘wake up’ PENN.” There is a photograph by Jonathan Williams of Lorine Niedecker on the wall across from one of my favorite photographs of CD Wright. On the table, books on the flowers, birds, trees, forests, and geology of Northern California. 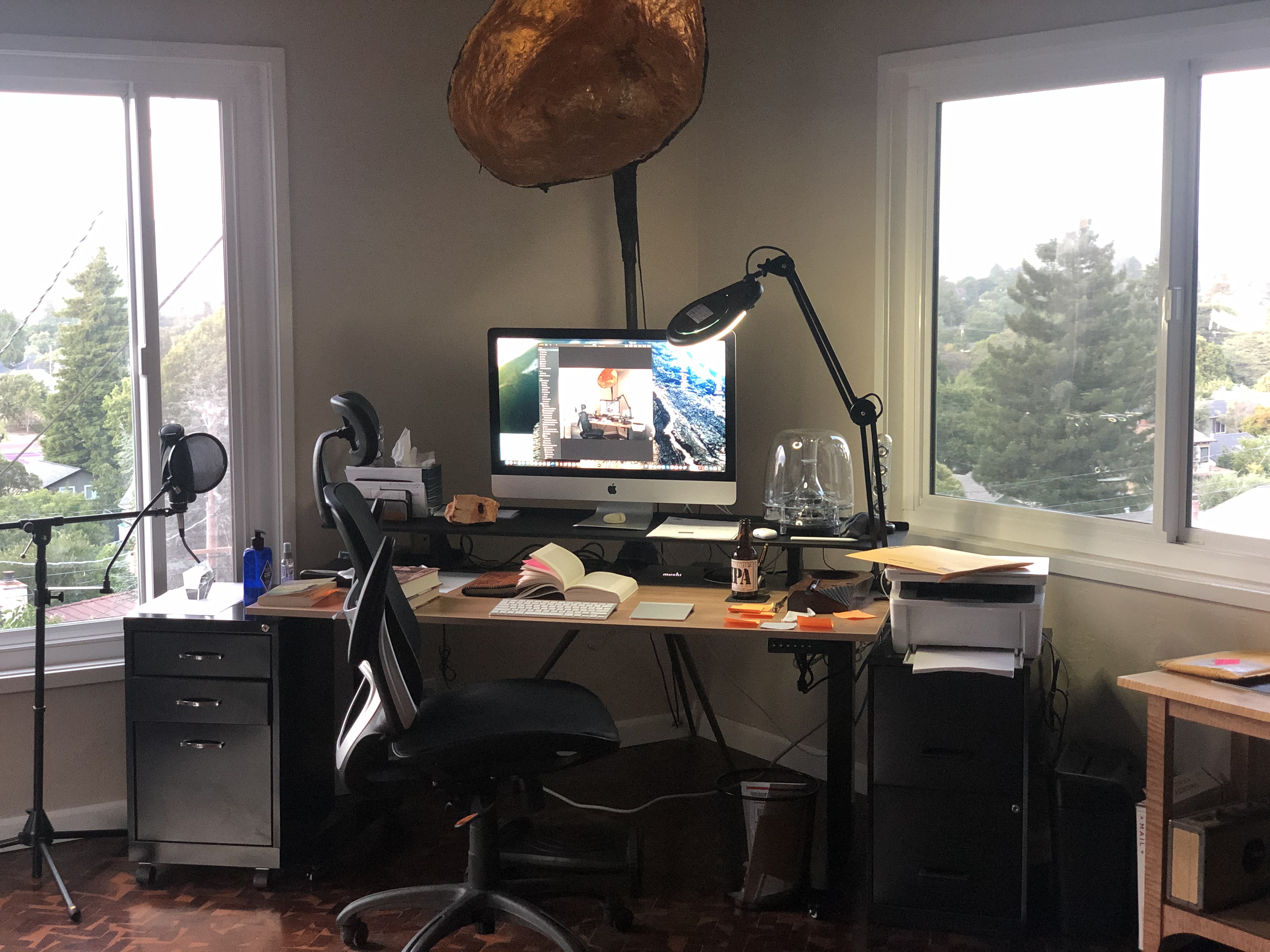 The desk stretches out like one of those flat-bodied Surinam toads you can see at the San Francisco zoo. A wide, wafer-thin toad basking under the golden moon of a sculptural lamp (also by BWG). The clarinet case on the lower shelf of the table to the right doesn’t get opened nearly enough, according to me. Too often, according to my neighbors.

Hunched on a limb of that lichenous walnut tree just outside the desk window is the magnum version of the nightmare that perched above poor Edgar Poe’s chamber door. “Is there—is there balm in Gilead?—tell me—tell me, I implore!”

Or maybe this photograph, hanging on the wall beside the desk, has summoned the vulture. San Francisco-based photographer Lucas Foglia, whose work appears as part of a collaboration in an ND book, has “the eye” and a developed communitarian ethics about photographing others.

Hanging on the same wall is this black and white by Raymond Meeks, whose most recent exhibition, “Sonder,” took place at the Minnesota Street Project in San Francisco. He’s long been one of my favorite photographers, and his work too, has been published by ND—inside one book and on the cover of another.

And now, exiting the room with the New Directions bookshelf on your right, you’ll step past this sculpture by Ashwini Bhat. We’ve been working on collaborations connected to the California landscape, the fires, stressed and diminishing environmental diversity— and finding inspiring impulses and precedents to model.