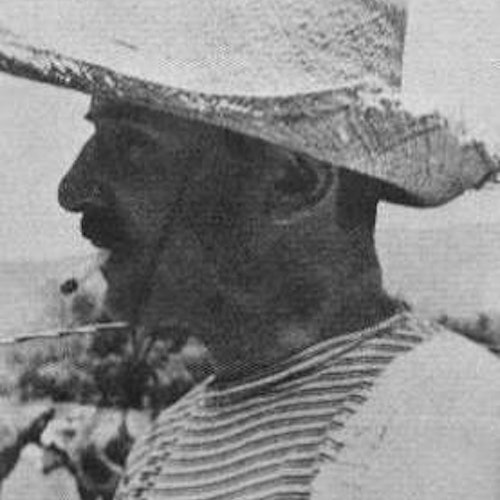 Day Of The Locust

Miss Lonelyhearts & The Day of the Locust

In 1962, poet Hayden Carruth wrote, “Nathanael West, who died almost unknown in 1940, is recognized today as one of the most significant American writers of his time.” Here is Carruth’s capsule biography of West:

Shortly thereafter became assistant manager of the Sutton Hotel, East 56th Street, which became the meeting place for literary friends, many of whom lived there for various periods free of charge.

The Dream Life of Balso Snell published in 1931; well-received, but sales were poor. The author legally assumed the name Nathanael West, under which he had been writing. Summer of 1931 spent on a hunting trip to the Adirondacks, the first of many such expeditions with various friends. Literary friends of the period included James T. Farrell, Edmund Wilson, Erskine Caldwell, Robert Coates, Malcolm Cowley.

Miss Lonelyhearts published in 1933; again the reviews were good but the public response disappointing. The book was sold to Hollywood, however, and West was invited to help in preparing the movie scenario. Experience in California was frustrating. His suggestions were not heeded, his book was twisted out of recognition and even re-titled, and he returned to New York after a few months.

About the end of 1933, West settled in Erwinna, Pennsylvania, where he had bought a small house.

In 1935 West returned to Hollywood where he worked for five years as a scriptwriter, progressing to films of considerable importance. Well regarded for his craftsmanship. West looked upon his movie assignments as hackwork, however, and determined — like his friends F. Scott Fitzgerald and William Faulkner — that service in the “dream factory” should not affect him as a serious writer. His view of Hollywood was distilled in The Day of the Locust, which was published in 1939.

Married Eileen McKenney (or Ruth McKenney’s My Sister Eileen) in April, 1940. Made plans for a new novel. But before work could be begun, he and his wife were killed in an automobile accident near El Centro, California, on 22nd December, 1940. West was thirty-seven years old.

On March 8, 1984, then Vice-President of New Directions, Griselda Ohannessian, wrote a letter in reply to a scholar who was curious as to how West came to be published by the press. She wrote:

Answering your letter addressed to Mr. Laughlin, he is pretty sure it was William Carlos Williams who brought Miss Lonelyhearts to his attention as Dr. Williams was a friend of S. J. Perlman, West’s brother-in-law. At the time, in the forties, the New Classics series was very much an on-going project as you may know, and Miss Lonelyhearts, then out-of-print, fitted right in with the concept of the series. It is amazing, for instance, to think that Fitzgerald’s Great Gatsby, until it was reissued in the NC series, had not been available for some time. Miss Lonelyhearts was brought out by New Directions in 1946, so the decision to do so would have been made sometime in the previous year. 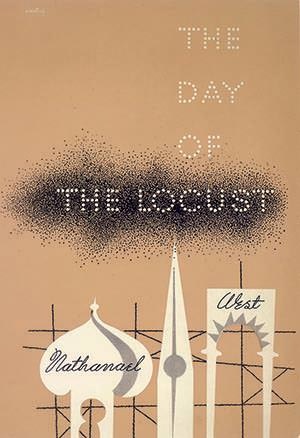 Day Of The Locust

Admired by F. Scott Fitzgerald, Dorothy Parker, and Dashiell Hammett, and hailed as one of the “Best 100 English-language novels” by Time magazine, The Day of the Locust continues to influence American writers, artists, and culture. Bob Dylan wrote the classic song “Day of the Locusts” in homage and Matt Groening’s Homer Simpson is named after one of its characters. No novel more perfectly captures the nuttier side of Hollywood. Here the lens is turned on its fringes – actors out of work, film extras with big dreams, and parents lining their children up for small roles.…
More Information
Your Independent Bookstore Barnes & Noble Amazon 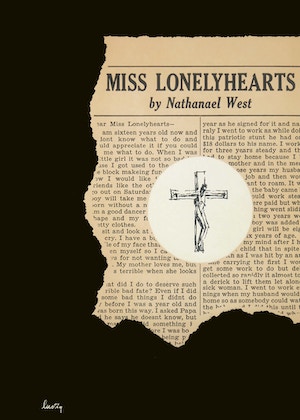 With a contribution by Harold Bloom

Praised by great writers from Flannery O’Conner to Jonathan Lethem, Miss Lonelyhearts is an American classic. A newspaper reporter assigned to write the agony column in the depths of the Great Depression seeks respite from the poor souls who send in their sad letters, only to be further tormented by his viciously cynical editor, Shrike. This single volume of Miss Lonelyhearts features its original Alvin Lustig jacket design, as well as a new introduction by Harold Bloom, who calls it “my favorite work of modern American fiction.…
More Information
Your Independent Bookstore Barnes & Noble Amazon 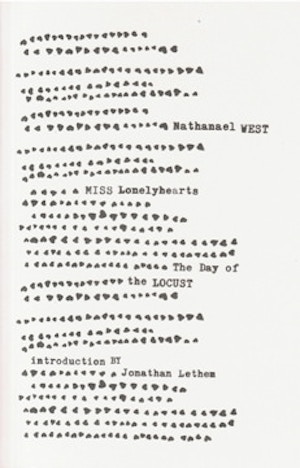 Miss Lonelyhearts & The Day of the Locust

With a contribution by Jonathan Lethem

Miss Lonelyhearts — compared by Flannery O’Connor to Faulkner’s As I Lay Dying — is about a newspaper reporter assigned to write the agony column, but, caught up in a vision of suffering, he seeks a way out (through art, sex, religion), only to be rebuffed at every turn by his cynical editor Shrike. The Day of the Locust — considered by many to be the best novel ever written about Hollywood — is about Tod Hackett, who hopes for a career in set design only to discover the boredom and emptiness of Hollywood’s inhabitants.…
More Information
Your Independent Bookstore Barnes & Noble Amazon

Nathanael West’s humor is of course not at the expense of the victim. It is a horselaugh at a world that is too ugly and bitter to be dealt with in any other way.

The setting, a persuasively scoured and desperate early-’30s Manhattan, is rendered with the scalpel precision that was West’s prose standard.

By applying the magpie aesthetics of Surrealism and T.S. Eliot to the ‘American Grain,’ by delving into the popular culture and emerging not with surrender or refusal but a razor-cool critique, West became the great precursor to Heller, Pynchon, Philip K. Dick, George Saunders, and so much else, likely including Bob Dylan’s ‘Desolation Row.’

Taken together, these two novels say more about the way we live now––and the things that brought us to our present pass––than any other work of fiction I can think of.