The Rise of Life on Earth

Joyce Carol Oates (1938– ) has an extensive bibliography which includes more than seventy books. She has written novels, short stories, poetry, and essays, and at one point was writing two or three books a year. She has received tremendous acclaim for her work. Oates first began writing when her grandmother gave her a typewriter as a teenager. She went on to graduate from Syracuse University as the valedictorian, and obtained her masters in English from the University of Wisconsin—Madison. Oates has taught at the University of Windsor in Canada, the University of Detroit, and Princeton University. Among the many nominations and awards Oates has received are the 1969 National Book Award for them, a PEN/Malamud Award for Excellence in Short Fiction, and three nominations for the Pulitzer Prize (Black Water, 1992; What I Lived For, 1994; and Blonde, 2000). Joyce Carol Oates is the author of The Rise of Life on Earth. 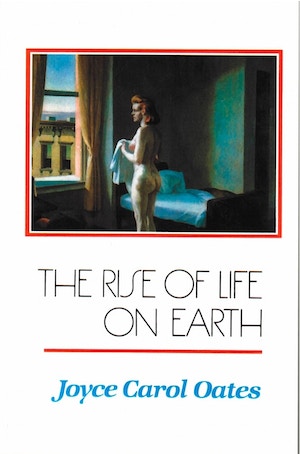 The Rise of Life on Earth

Selected by The New York Times Book Review as one of the most notable books of 1991 and now available as a New Directions paperbook, Joyce Carol Oates’ The Rise of Life on Earth is a memorable portrait of one of the “insulted and injured” of American society. Set in the underside of working-class Detroit of the ’60s and ’70s, this short, intense novel sketches Kathleen Hennessy’s violent childhood and follows her into her early adult years as a hospital health-care worker.…
More Information
Your Independent Bookstore Barnes & Noble Amazon

Like most important writers—Joyce, Proust, Mann—she has an absolute identification with her material: the spirit of a society at a crucial point in its history.

Like most important writers––Joyce, Proust, Mann––she has an absolute identification with her material: the spirit of a society at a crucial point in its history.