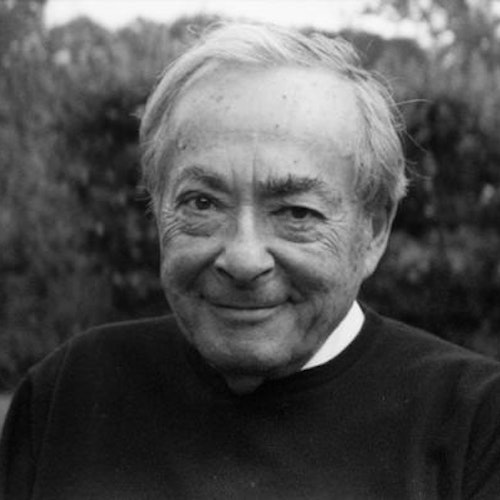 The Poetry of Thought

George Steiner at the New Yorker

Professor George Steiner was born in Paris on April 23, 1929. He was educated at the Universities of Paris, Chicago, Harvard, Oxford and Cambridge. He was a member of the editorial staff at The Economist in London during the 1950s before beginning an academic career as a fellow at the Institute for Advanced Study at Princeton University in 1956. He was appointed Gauss Lecturer at Princeton in 1959. Prof. Steiner has been a fellow of Churchill College, Cambridge, since 1961 and was Professor of English and Comparative Literature at the University of Geneva between 1974 and 1994. He has held visiting professorships at Yale, New York University, the University of Geneva and Oxford University. He is an honorary member of the American Academy of Arts and Sciences, an honorary fellow of Balliol College Oxford, and has been awarded the Chevalier de la Légion d’Honneur by the French Government and the King Albert Medal by the Royal Belgian Academy, the Truman Capote Lifetime Achievement Award for Literature in 1998 and in the same year was elected Fellow of the British Academy. He was the Weidenfeld Professor of Comparative Literature at the University of Oxford and the Charles Eliot Norton Professor of Poetry at Harvard University. He is currently Extraordinary Fellow of Churchill College at Cambridge University. He has been a regular contributor of reviews and articles to journals and newspapers including the New Yorker, the Times Literary Supplement and The Guardian. Professor Steiner lives in Cambridge, England. 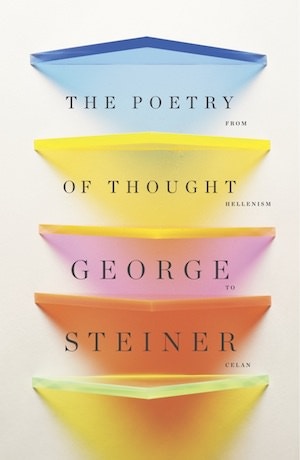 The Poetry of Thought

With his hallmark forceful discernment, George Steiner offers The Poetry of Thought as his magnum opus: an examination of more than two millennia of Western culture that argues on behalf of the essential oneness of great thought and great style. Sweeping yet precise, moving from essential detail to bracing illustration, Steiner spans the entire history of philosophy in the West as it entwines with literature, finding that, as Sartre stated, in all philosophy there is “a hidden literary prose.…
More Information
Your Independent Bookstore Barnes & Noble Amazon 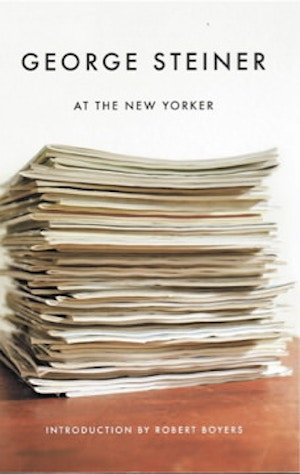 George Steiner at the New Yorker

With a contribution by Robert Boyers 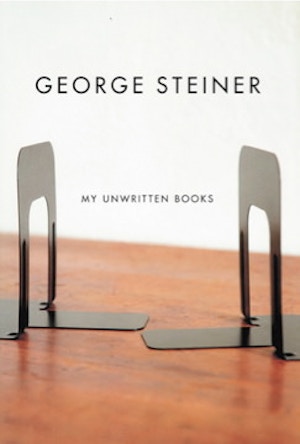 In this fiercely original and audacious work, George Steiner tells of seven books which he did not write. Because intimacies and indiscretions were too threatening. Because the topic brought too much pain. Because its emotional or intellectual challenge proved beyond his capacities. The actual themes range widely and defy conventional taboos: the torment of the gifted when they live among—when they confront—the very great; the experience of sex in different languages; a love for animals greater than for human beings; the costly privilege of exile; a theology of emptiness.…
More Information
Your Independent Bookstore Barnes & Noble Amazon

A late, late, late Renaissance man … a European metaphysician with an instinct for the driving ideas of our time.

A unique, powerful, and necessary voice.

An intelligent, deeply felt humanism characterizes Steiner's work: a tradition of intelligence and style lives in this prolific man.

The polymath's polymath. The erudition is almost as extraordinary as the prose: dense, knowing, allusive. In Steiner's work the suggestion of total cultural mastery, from the pre-Socratics to the postmodern, is inescapable.

Steiner's brilliance is revealed in every one of these essays, showcasing his vast topical knowledge alongside his deft ability to pin down the significance of history's most important people, events and ideas.

The Poetry of Thought is denser in its language, more disquieting in its arguments, more in line with Steiner’s stronger works, such as Heidegger and many of the essays collected in No Passion Spent Steiner’s overall subject here is the interlocked nature of poetic language and philosophical thought, and how the intellect manifests itself through this connection.