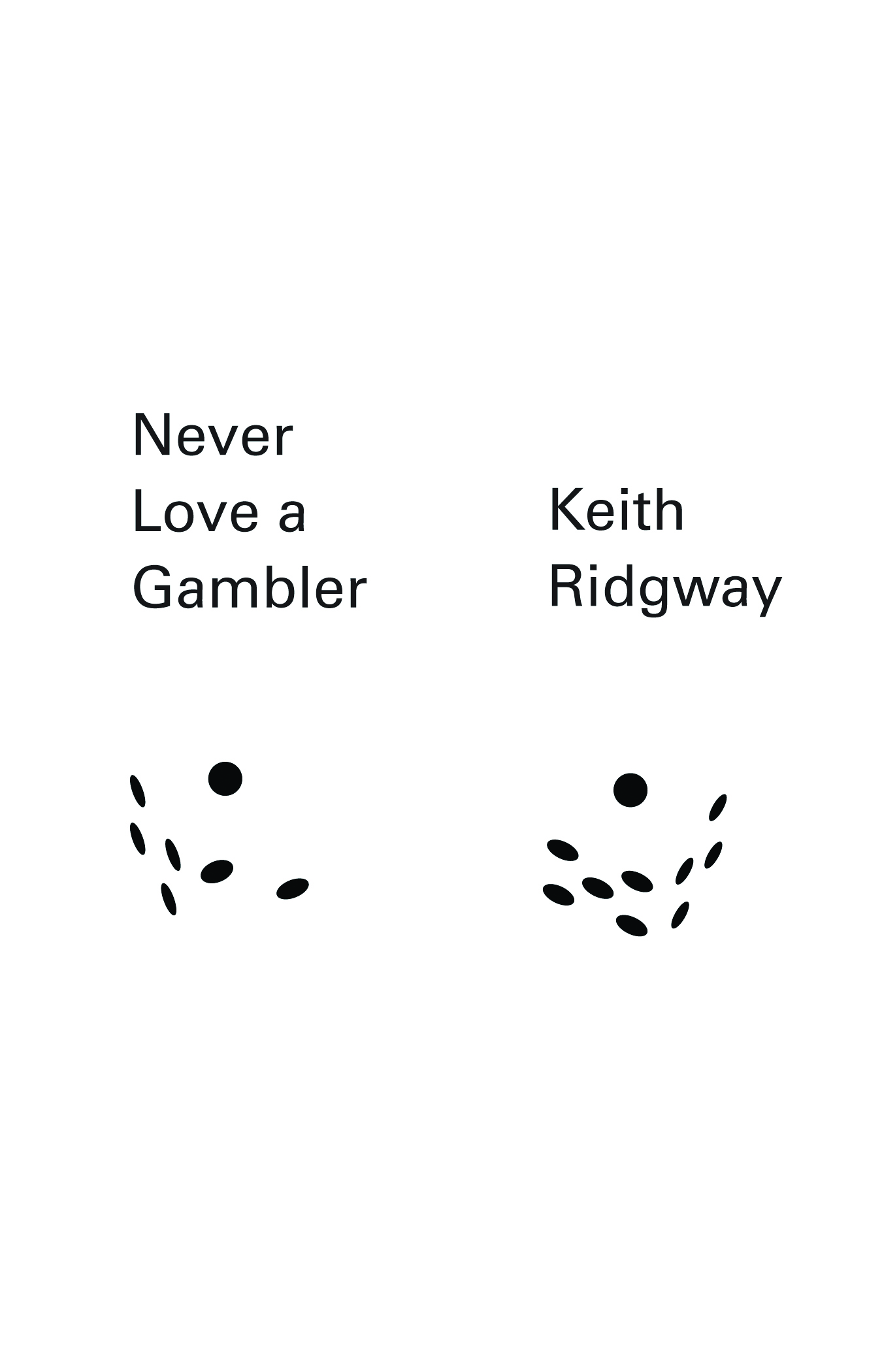 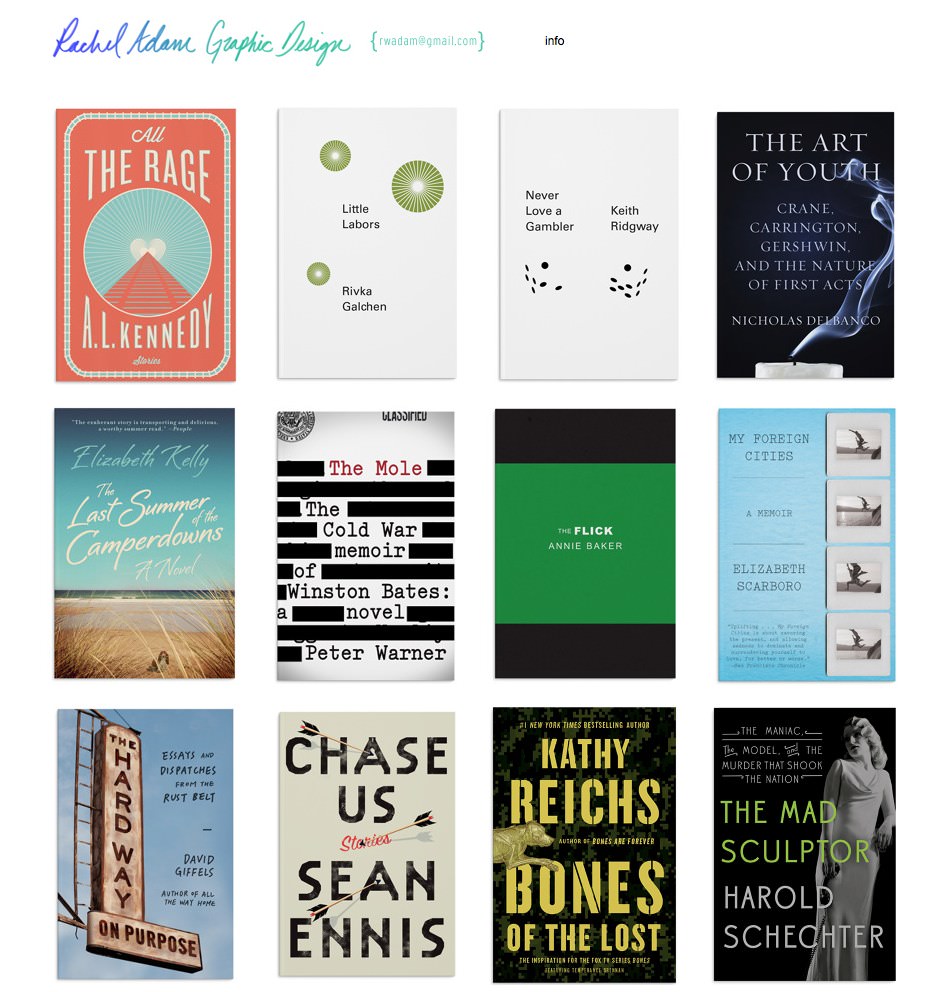 New Directions has a long record of working with acclaimed and noteworthy up-and-coming book designers, like Rachel Adam. She’s been working for Rodrigo Corral Design Studio for the last couple years and has done some great work for us, including the recent designs in our Pearl series, a couple of which, such a Keith Ridgway’s Never Love a Gambler (shown above), were listed in Print magazine’s recent feature “19 Striking Book Covers of 2014.“ Last week, I had a chance to ask her some questions.

Kelsey Ford: How did you get into book design?

Rachel Adam: I had a really unusual path. I went to Colgate and studied Political Science and then ended up working in advertising. I really liked creativity and was a pretty creative person but didn’t really think that I could make a career out of it myself, so the next best thing was to go into advertising and work with designers. I did that for awhile. Then I realized I wanted to see if I could do this myself. When I was 25, I enrolled in a portfolio program at Parsons. I worked full-time and went to school part-time. I really wanted to be a book cover designer, which felt impossible because that’s what everybody wants to do and there are so few of them out there. But I figured, if I’m going this far, I might as well just shoot for the moon and see if I can do it. I ended up getting an internship with Rodrigo Corral Design and that became a job. I’ve been working here at the studio every since.      I think the interesting thing is having not studied graphic design in undergrad, and coming from a different background, people ask me all the time, “How did you do it? I want to transition. I want to have a more creative career.” It’s totally doable! It’s nice to hear an alternative way for people to have gotten to where they are. I remember sitting there, working in advertising, thinking, “Oh my gosh, I really want to be a graphic designer. What do I do? Is it possible? Can I just change my career?” I tried to seek out people who had done that as well, and it was nice to hear that it was possible — that I wasn’t doomed at 25. It’s the question I get asked the most.

KF: Why did you want to become a book designer?

RA: I love books. I think they’re amazing, beautiful objects. I could not imagine anything cooler than basically helping them come to life. For me, if you think about the book as an object itself, a full bookshelf is basically an art collection. On top of that, I love to read. I can consume a book in a day very happily.

KF: Is there an author, a series of books, or one book that you’ve wanted to redesign?

RA: I always thought it would be fun to redesign boring looking textbooks. Just do something totally insane so that some high school kid thinks, “Oh my god, that’s my history book? Sweet!”

RA: Once I sit down at the computer, I do a bunch of research. I create a folder and just throw everything under the sun in there that could be relevant, like comparison titles and covers. Even just a paint swatch that I’d found on Pinterest. And then, from there, I come up with a concept. It’s one thing to make something look good, but the meat of designing any book cover is the idea behind it. The goal of the research and brainstorming is inspiration:  whether it’s your concept, the book itself, the references you’ve collected, the research you’ve done. Then hopefully, a cover begins to materialize.

KF: I know that you’ve done a lot of the recent Pearl designs and redesigns. What’s it like working with that series?

RA: Well, for the Pearls, it’s not a total, complete redesign — you still have the white background, the geometric shapes, a single color. So it’s more like tweaking the rules a little bit. Or using the rules to make something else. The Pearls are so much fun to do. Just a stream-of-consciousness act.

KF: Do you have favorite book designers?

RA: Definitely Rodrigo. And of course the other big ones: Chip Kidd, Peter Mendelsund, John Gall. They’re so good. Not to mention many, many others. I think also — and this may sound strange — but Bill Watterson, who did Calvin & Hobbes, was a huge influence on me. When I was in grade school, we could order books from those old Scholastic catalogs that they would hand out in class and I thought Bill Watterson made the most beautiful books in the whole world. The writing was amazing, so I would have read Calvin & Hobbes anyway. But the way he used different mediums and color and space was so exciting. It was the first time I remember realizing how dynamic and beautiful a book could be –– I’ll probably always take my love of his stuff with me in various ways. I saved all his comic strips from the Sunday paper. I wouldn’t describe him as a book designer, but he clearly cared about designing for print and he made me realize I cared too.

More of Rachel Adam’s design work can be found at racheladam.com.

_Kelsey Ford is the director of eBooks and permissions at New Directions. You can follow her on twitter at _@kelsfjord