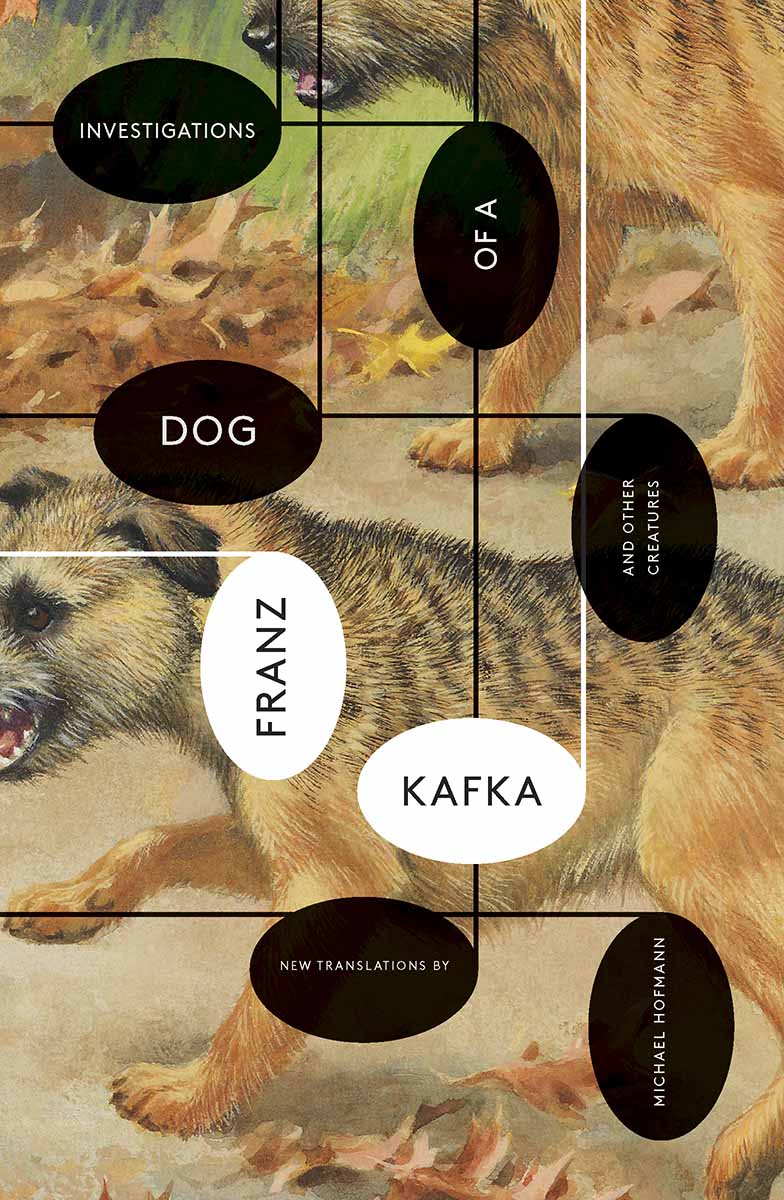 Investigations of a Dog & Other Creatures

In our synagogue lives an animal about the size of a marten. There have been many sightings of it, as it will allow a human being to approach to within five feet. Its color is a pale turquoise. No one has yet touched its fur, so there is nothing to be said about that, although one would like to insist that its true color is unknown and that the color one sees is as a result of the dust and mortar that have caught in its fur, the color bearing some resemblance to the inside of the synagogue, only a little lighter. Aside from its timidity, it is an unusually calm and sessile animal; if it weren’t scared so often, it would probably move around less. Its preferred spot is the grille overlooking the women’s section. There, with visible glee, it hooks itself fast to the metalwork, stretches out and looks down into the prayer room; its exposed position seems to give it pleasure, but the temple servant is under instructions not to permit the animal by the grille, otherwise it would get used to the spot, and that can’t be allowed to happen because the women are afraid of the animal. Why they should be afraid of it is a little unclear. At first sight it can look fearsome — the long neck, the triangular face, the almost horizontally protuberant teeth, on the upper lip a line of long — longer than the teeth — evidently very spiny pale bristles, all of which can indeed give one a turn, but soon one will understand how harmless this apparent terror actually is. Above all, it steers clear of people, it’s shyer than a forest animal, its ties are exclusively to the building, and its tragedy lies in the fact that the building it has chosen is a synagogue, which at times can be a very animated place. If communication with the animal had been possible, then we would have been able to offer it the assurance that the community in our little highland town is shrinking by the year, and is already having difficulties finding the funds to keep up the building. It is quite possible that in a while our synagogue will have become a granary or something of the sort, and that the animal will find the peace it so painfully lacks now.

It is only our women who are afraid of the animal — the men have long since become indifferent to it — one generation has shown it to the next, it has been seen time and time again; in the end we don’t even raise our eyes to look at it, and even the children, seeing it for the first time, no longer remark on it. It has become the synagogue pet, and why should the synagogue not have a special pet that doesn’t appear anywhere else? If it weren’t for the women, we should hardly be aware of the existence of the beast. But even the women are not really afraid of it: it would be too odd as well, to fear an animal like that, day in, day out, for years, for decades. They say in their defense that the animal is usually closer to them than it is to the men, and this is true. The animal doesn’t dare go down to the men, and no one has ever seen it on the floor. If it is banished from the grille to the women’s section, then it tries to keep the same elevation on the opposite wall. There is a very narrow ledge there, barely two fingers’ breadth; it runs around three sides of the synagogue, and on this ledge the animal sometimes dashes back and forth; usually, though, it sits quietly in a particular spot overlooking the women. It’s almost inexplicable how it can use this narrow path so easily, and the way it turns, having reached the end, is quite remarkable.

It is already a very old animal, but it never hesitates to perform the most daring somersault, which never fails either: it turns around in midair, and there it is doubling back again the same way. Admittedly, if you’ve seen it a few times, you’ve probably seen it enough and you’ve no need to see it again. It’s neither fear nor curiosity that keeps the women agitated; if they worked harder at their praying, they could forget all about the animal, as the devout women do, if only the others who are in the majority would allow it, but they like to draw attention to themselves, and the animal is a welcome pretext for doing so. If they could, and if they dared, they would have lured the animal even closer to themselves, in order to show still more fear of it.

But in reality, it’s not their proximity that the animal seeks; as long as it’s not being attacked, it’s every bit as indifferent to them as it is to the men; ideally it would probably remain in the obscurity in which it lives when there are no prayers — evidently in some hole in the wall that we have yet to discover. It’s only when we start to pray that it appears; alarmed by the noise, it wants to see what’s going on, it wants to remain alert, to be free, capable of flight; fear causes it to emerge, fear causes it to perform its somersaults, and then it doesn’t dare retreat until the service is over. It quite naturally prefers its elevation because there it has security and the best possibilities of running on grille or ledge, but it’s not always there by any means, sometimes it climbs down toward the men — the curtain of the Ark is held by a gleaming brass rail that seems to tempt the animal, often it has been seen creeping toward it, but then it always sits there quietly. Even when it’s sitting just behind the Ark, you couldn’t say it was being disruptive, with its shiny, always open, possibly lidless eyes that seem to gaze at the congregation, without regarding anyone in particular, just looking in the direction of the dangers from which it may feel threatened.

In this respect, until recently at least, it seemed not much less understanding than our women. What dangers does it have to fear? Who intends it any harm? And hasn’t it lived for many years in a completely self-contained way? The men aren’t bothered by its presence, and the majority of the women would probably be disappointed if it disappeared. And since it’s the only animal in the building, it hasn’t any natural enemies. It could have seen that over the course of the years. And while the religious service with all its noise may be very alarming to the animal, it is replayed day after day in a moderate way, heightened on the holy days, but always regularly and without interruption. Even the most timid animal should have been able to get used to it by now, particularly if it saw that it’s not the sound of pursuers, but a noise that doesn’t concern it at all. And still the fear. Is it the memory of times long gone, or a presentiment of times to come? Does this old animal perhaps know more than the three generations that foregather in the synagogue each time?

Many years ago, apparently, attempts were made to drive the animal away. Perhaps they were, but more likely it’s just a story. What can be confirmed, though, is that we made inquiries whether it was permissible, from the point of view of religious law, to tolerate such an animal in the house of God. Views from various prominent rabbis were solicited, opinions differed, the majority were in favor of expulsion and the reconsecration of the house of God, but that was more easily said than done — in reality it was impossible to drive the animal away.