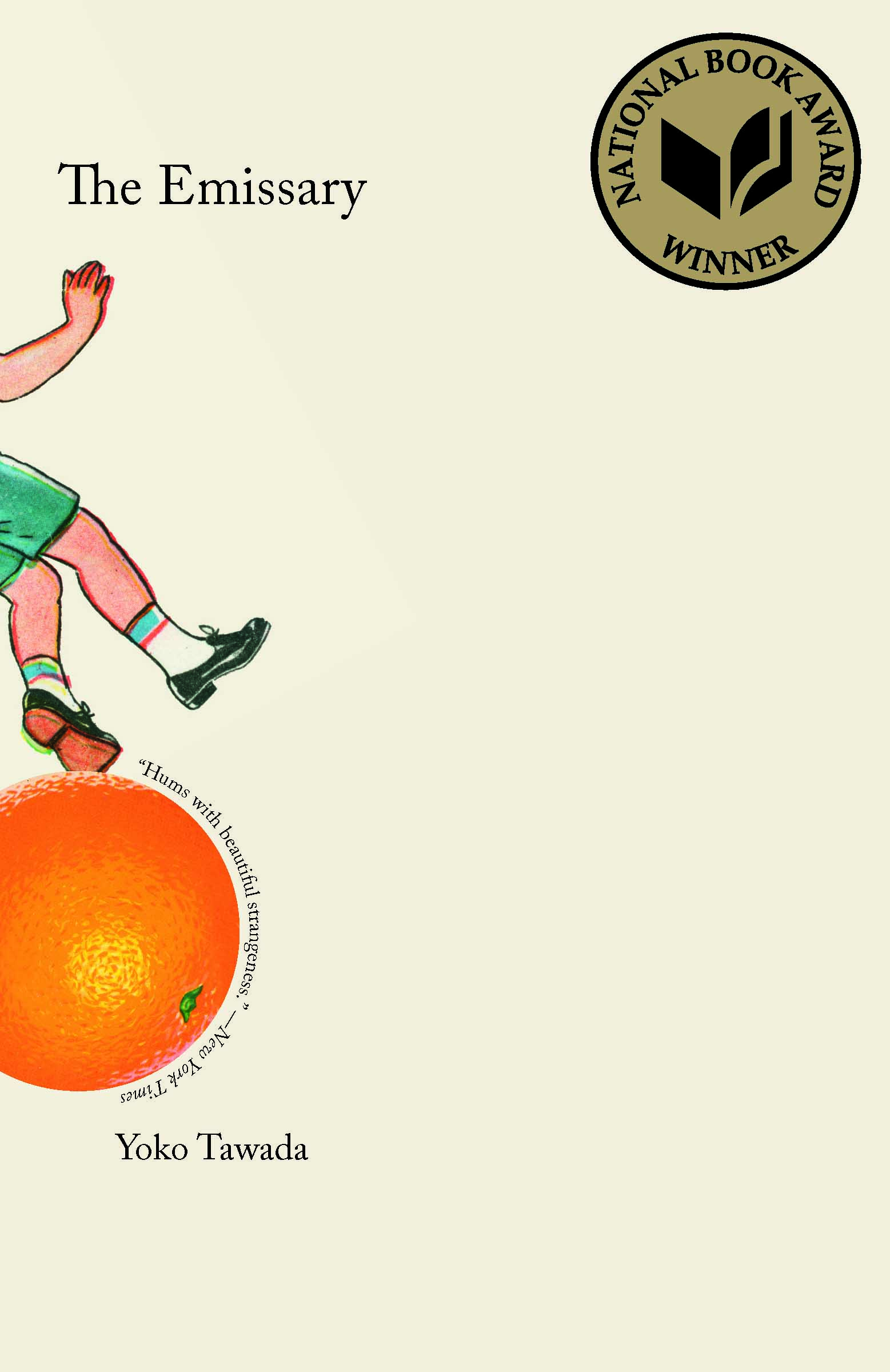 The Emissary is a finalist* for the 2018 National Book Award for Translated Literature. Our heartfelt congratulations to Yoko Tawada and her translator Margaret Mitsutani. In the opening, of Tawada’s breathtakingly lighthearted meditation on mortality, rent-a-dogs, capsule hotels for fish, and blue silk pajamas.

Yoko Tawada and Margaret Mitsutani are the winners of the 2018 National Book Award for Translated Literature. Congratulations to Yoko and Margaret! We are thrilled. Read about it in Publishers Weekly and [NPR]().

Still in his blue silk pajamas, Mumei sat with his bottom flat on the tatami. Perhaps it was his head, much too large for his slender long neck, that made him look like a baby bird. Hairs fine as silk threads stuck to his scalp, damp with sweat. His eyes nearly shut, he moved his head as if searching the air, trying to catch on his tympanic membrane the scraping of footsteps on gravel. The footsteps grew louder, then stopped. The sliding door rattled like a freight train, and as Mumei opened up his eyes, morning light, yellow as melted dandelions, poured in. The boy threw back his shoulders, puffed out his chest and stuck out both his arms like a bird spreading its wings.

Smiling, deep wrinkles around his eyes, Yoshiro came closer, his shoulders heaving. No sooner had he lowered his head, lifting a foot to take off a shoe, than beads of sweat dripped from his forehead.

Every morning, Yoshiro rented a dog from the Rent-a-Dog place on the corner to run with along the riverbank for about half an hour. When the water level was low, the river looked like silver ribbons that stretched out much further than you’d expect. Long ago, this sort of purposeless running had been referred to as jogging, but with foreign words falling out of use, it was now called loping down, an expression that had started out as a joke meaning “if you lope your blood pressure goes down,” but everybody called it that these days. And kids Mumei’s age would never have dreamt that adding just an e in front of it the word lope could conjure up visions of a young woman climbing down a ladder in the middle of the night to run away with her lover.

Yet even now, when foreign words were rarely used, the walls of the Rent-a-Dog store were still plastered with the katakana script used to write them. When Yoshiro had just started loping down and wasn’t sure how much speed he could manage, he’d first rented a Yorkshire terrier, think- ing a small dog might better, but then he’d found it much too fast. He’d stumbled, almost falling, gasping for breath as the dog pulled him along, turning its head now and then, cheekily holding its snout high with a self-satisfied air as if to say, “How’s that for speed?” The following morning he’d tried a dachshund that turned out to be so lazy it had sunk to the ground after the first two hundred yards or so, forcing Yoshiro to drag it all the way back to the Rent-a-Dog place.

“Some dogs sure don’t like to go for a walk,” he’d griped as he returned the animal.

“A what? A walk? Oh, yeah, a walk, ha, ha, ha,” laughed the man behind the counter, finally catching on. It was a superior sort of laugh, directed at this old geezer who still used outdated expressions like a walk. The shelf life of words was getting shorter all the time—it wasn’t only the foreign ones that were falling out of use. And some words that had disappeared after being labeled “old-fashioned” had no heirs to take their place.

A week before he’d rented a German shepherd, which had been just the opposite of the dachshund; in fact, that dog was so well trained he made Yoshiro feel inferior. Yoshiro could run at top speed until he was so exhausted he’d be dragging his feet, barely moving, but whatever the pace, the shepherd stayed with him, right at his side. When Yoshiro looked at him the dog would flash back a glance as if to say, “How am I doing? Perfect, wouldn’t you say?” Disgusted by all this ex- actitude, Yoshiro firmly resolved never to rent another Ger- man shepherd.

So Yoshiro had never found his ideal dog, and yet when the man behind the counter asked “Which breed do you prefer?” he was secretly pleased with himself, the way he hemmed and hawed, unable to come up with a reply.

In his youth, Yoshiro had prided himself on always having an answer ready when someone asked who his favorite com- poser or designer was, or what kind of wine he preferred. Confident in his good taste, he had poured time and money into surrounding himself with things that would show it off. Now he no longer felt any need to use taste as the bricks and mortar for a structure called “individuality.” Though shoes were still important, he no longer chose them as a means of asserting his identity. The Idaten shoes he was now wearing were a new line recently marketed by the Tengu Company— extremely comfortable, they resembled straw sandals. The Tengu Company was based in Iwate Prefecture, and inside each shoe Iwate was written in India ink with a brush, fol- lowed by the kana for ma and de.* The younger generation, who no longer studied English, interpreted the “made” on old “Made in Japan” labels in their own way.

In high school, his feet had seemed almost like foreign ap- pendages the way they kept on growing, leaving the rest of his body behind, with soft, easily punctured skin that made him seek out brand-name foreign shoes to keep them cov- ered with thick, hard rubber. While working for the com- pany he’d joined after university, he had always worn heavy brown leather shoes to hide the fact that he didn’t intend to stick around very long. After publishing his first novel, he had spent part of the royalties on a pair of hiking boots. Be- fore leaving home, even if he was only going to the neighbor- hood post office, he would lace them up tight in case he got stranded somewhere.

It wasn’t until he was past seventy that his feet felt hap- piest in wooden or straw sandals. This sort of footwear left his insteps exposed to rain and mosquitoes, yet as he gazed down at the bare skin, quietly enduring all these dangers, he thought, “These feet are just like me,” and a desire to run welled up inside him. He’d been looking for something akin to straw sandals when he came across these shoes, made by Tengu, Inc.

Stumbling as he took his shoes off, Yoshiro rested a hand on the wooden pillar to steady himself, feeling the grain of the wood under his fingers. The years are recorded in rings inside the trunk of a tree, but how was time recorded in his own body? Time didn’t spread out gradually, ring after ring, nor was it lined up neatly in a row; could it just be a disorderly pile, like the inside of a drawer no one ever bothers to straighten? The thought made him stumble again; this time he put his left foot down to steady himself.

“Seems I’m still not very good at standing on one leg,” he muttered to himself, prompting Mumei to scrunch up his eyes, lifting his nose slightly as he asked, “Great-grandpa, are you trying to be a crane?” The moment he spoke, the boy’s head, which had been bobbing around gently like a balloon, abruptly stopped, settling into its proper place on top of his spinal cord as a mischievous, sweetly sour look appeared in his eyes. For a moment, his great-grandson looked so much like a little Buddha it rattled Yoshiro, leading him to bark in as harsh a tone as he could manage “Are you still in your pajamas? Hurry up and get dressed!” He yanked open the dresser drawer, where the child’s underwear and school clothes, neatly folded into a square the night before, were patiently awaitng their master’s call. Mumei always worried about his clothes, afraid they’d get up and leave in the mid- dle of the night. He’d be beside himself, picturing his shirt downing cocktails in some nightclub, his trousers dancing up a storm until they finally traipsed back home, dirty and wrinkled. Which was why Yoshiro always made sure they were safely locked up in the drawer before he went to bed.

“Get dressed by yourself—I’m not helping you this time.”

Plunking the clothes down in front of his great-grandson, Yoshiro went to the bathroom to splash his face clean with cold water. Wiping his face with a thin Japanese cotton towel, he stared at the wall in front of him. There was no mirror. He wondered how long it had been since he had seen his own image. Until he was in his eighties, he had checked his face every morning, trimming his nose hairs if they were too long, putting camellia salve on the wrinkles at the corners of his eyes if the skin was dry.

Yoshiro draped the little towel over the laundry pole in the garden, securing it with a clothespin. He wasn’t sure when they had stopped using plush, Western-style bath towels. They’d taken so long to dry there were never enough. Japanese- style towels, on the other hand, were so thin and light you could just hang them over the pole where they’d catch the wind, flapping gently and before you knew it they were dry. Long ago Yoshiro had been in thrall to those huge, heavy bath towels. Every time he used one he would stick it in the washing machine, tossing handfuls of laundry detergent in after it, but those days now seemed like a joke. Spinning all those heavy towels around in its belly was agony for the poor washing machine—each one would die of sheer exhaustion after a few years. Hundreds of thousands of dead washing machines had sunk to the bottom of the Pacific Ocean to become capsule hotels for fish.

* The Japanese word made (pronounced mah-day) means “to” or “until,” so Iwate made would mean “to Iwate.”