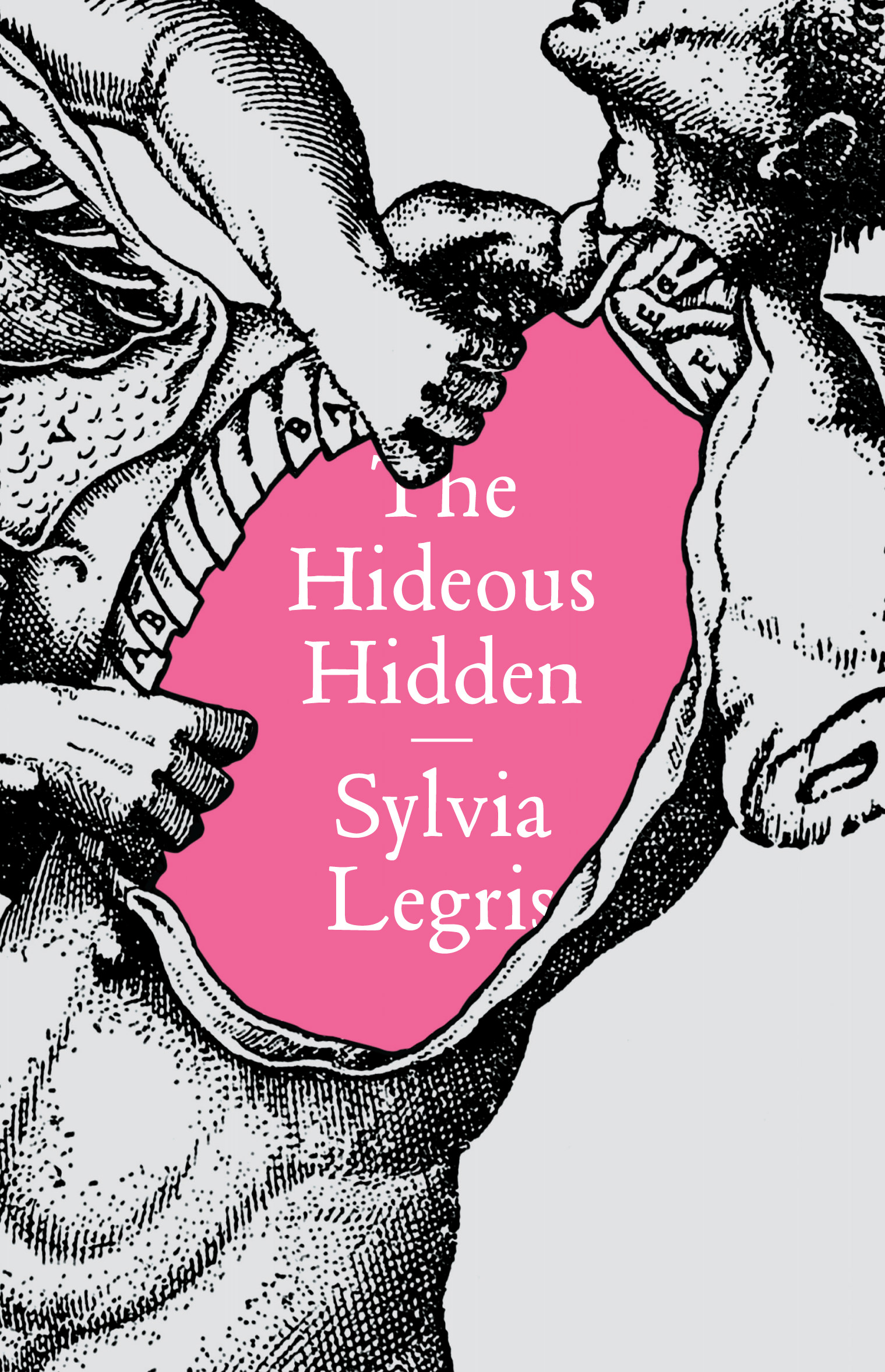 Notes from Within a Never-Expanding Radius or, Things Seen on Walks

It’s easy during non-plague times to go stir crazy in the winter in Saskatchewan, a season that can stretch from as early as September to as late as May. My partner and I have been social-distancing since March 14, when we were still deep in snow and cold. As the pandemic has gone on we’ve tried to build more of a routine into our lives, but the days unfailingly have a wateriness to them, lacking edges. With disconcerting dreams and disintegrated sleep, it sometimes feels like I’m living one endless day. I’ve been a big walker for a long time; as a non-driver in a city that has a patchy transit system, walking has often been my primary mode of transportation. Our days now are divided into walks and what we do between walks. We take three per day, not long, but long enough to help my partner, a Type 1 diabetic, to regulate his blood sugar. We rarely cover less than 10 km in a day, often considerably more; our average, according to my phone, is about 12 km. How different these quarantine walks would be without a phone to document things that I never would have seen pre-Covid. I move fast and I notice everything. If I were a bird, I would belong to what 19th-century ornithologist Joseph Grinnell called the “rapid peerers,” the speedy, head-darting species who can “detect among the grass blades motionless insect larvae.”

In the week leading up to Easter, Saskatoon had a sizeable dump of wet, heavy snow, the kind of snow that can induce a heart attack in an over-zealous shoveller, snow sticky enough to make snowballs and snowmen. Even though I live in a neighbourhood where there are quite a few young families, it’s rare that I see kids playing outside. A matter of timing, perhaps—when I’m out and about, they’re inside or at childcare or school. I imagine that when kids are at home, they’re fixated on some sort of device. One of the lovely side-effects, however, of social-distancing has been the conspicuous eruption of parents and kids doing things together, whether playing in their yards or extending their indoor lives outside (I saw a family having a picnic, Pyrex and all, on blankets on their front lawn), or trying to keep occupied while cooped up. Drawings and construction paper hearts are taped to the insides of windows, missives to passersby, small waves that say, “We’re here, we’re okay, we have paper and crayons.”

I photographed more than 60 snowmen (and snow rabbits, snow eggs) that went up in our neighborhood between April 8 and Easter Sunday on April 12.

Some were wearing PPE. 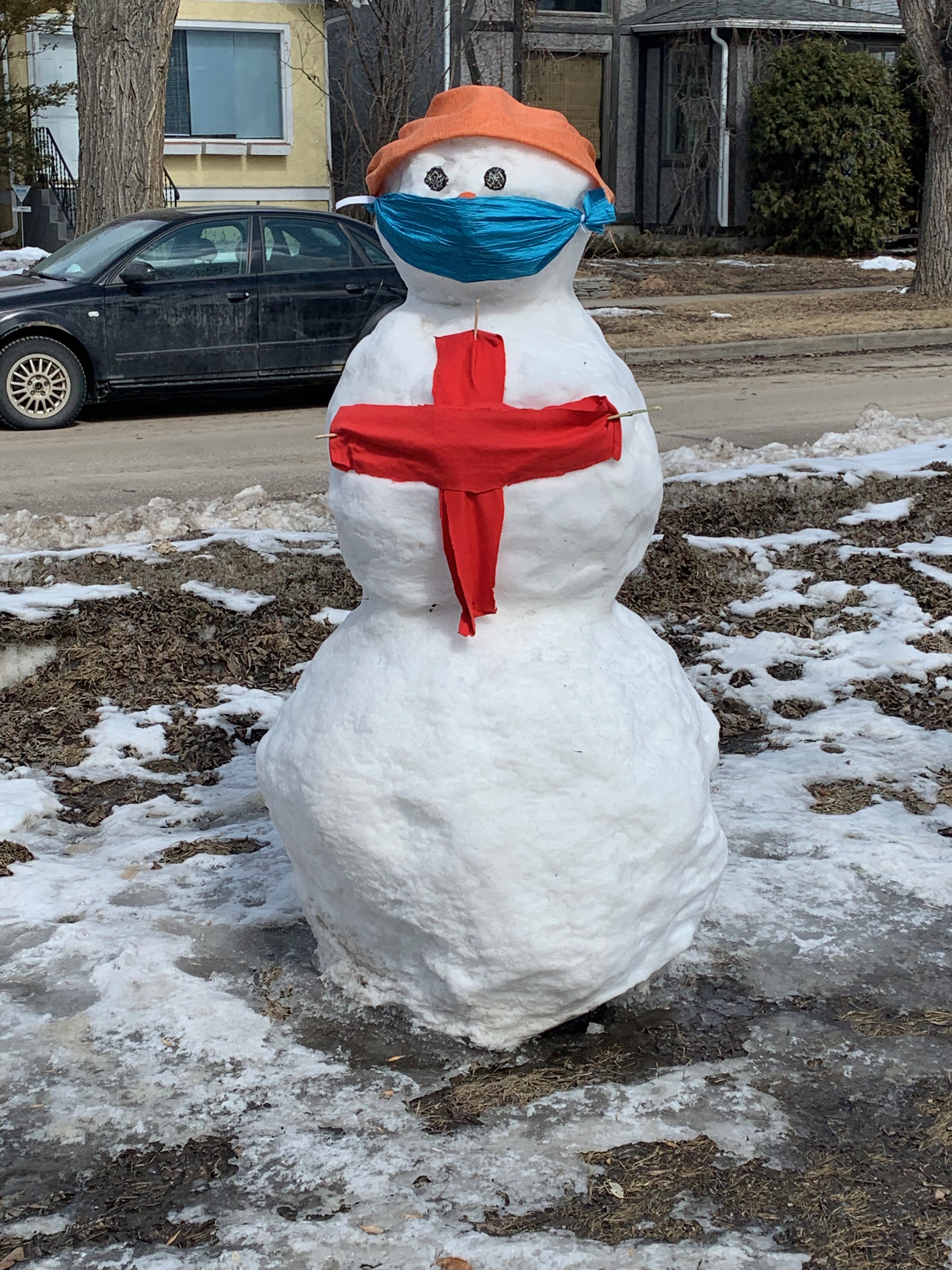 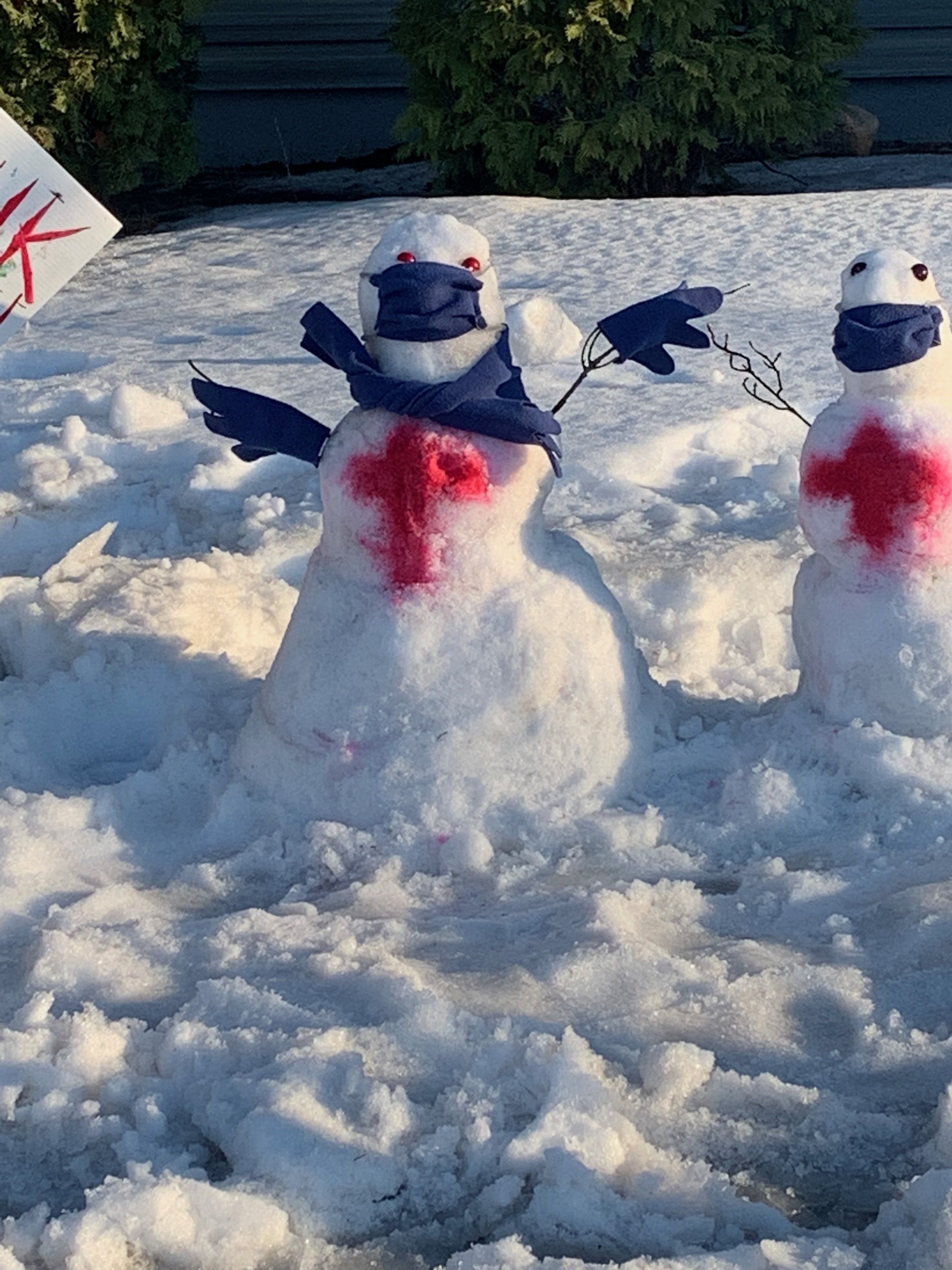 This one looks into the window so that only those inside can see his face. 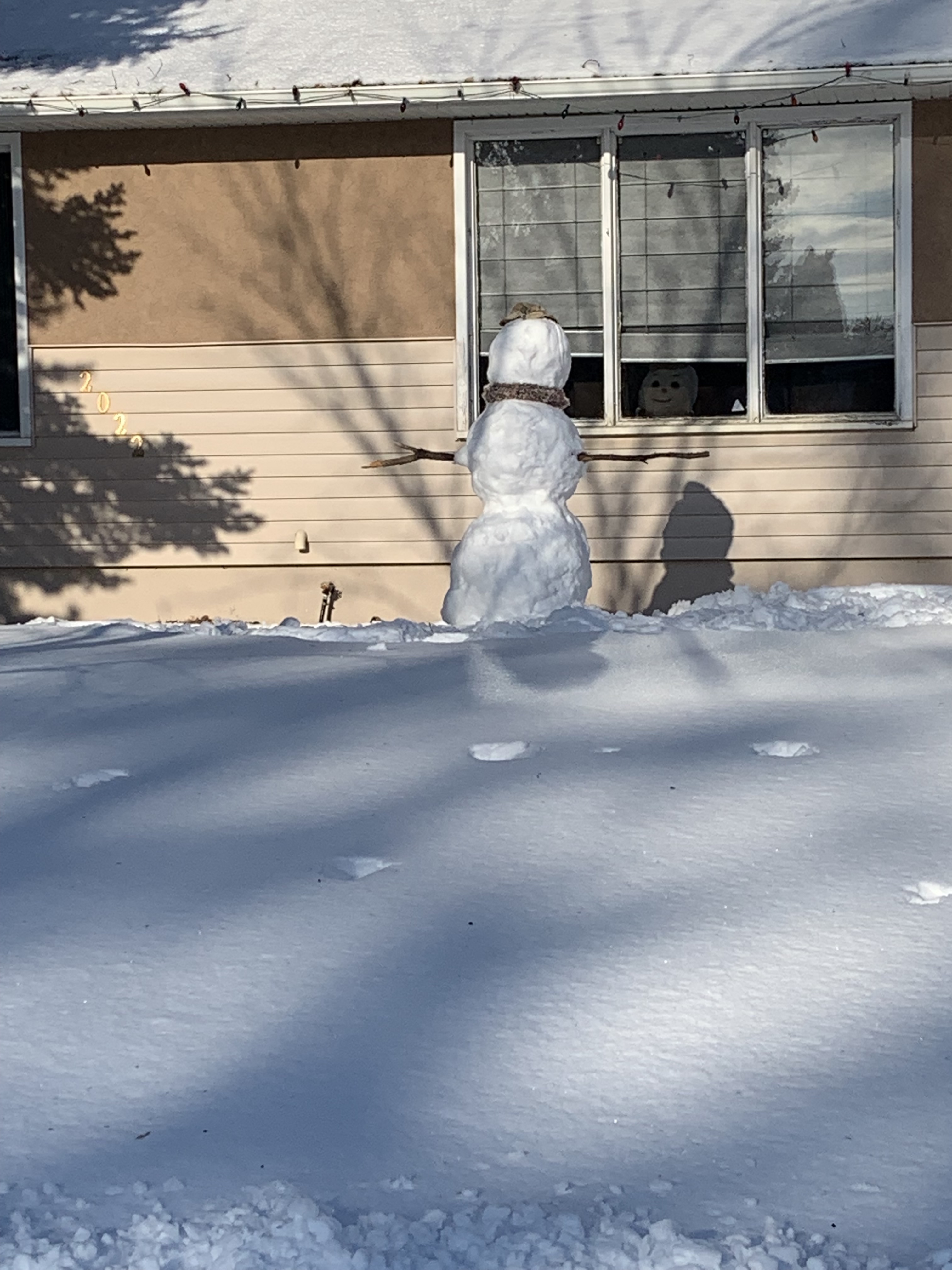 Here, his reflection in detail, looking very much like the Kool-Aid man.

From the beginning of the pandemic, discarded or dropped medical gloves became a new and frequent feature of the landscape. The gloves sometimes have a distressing beauty to them, juxtaposed as they are with urban nature. I have a growing “archive” of over 100 glove photos. 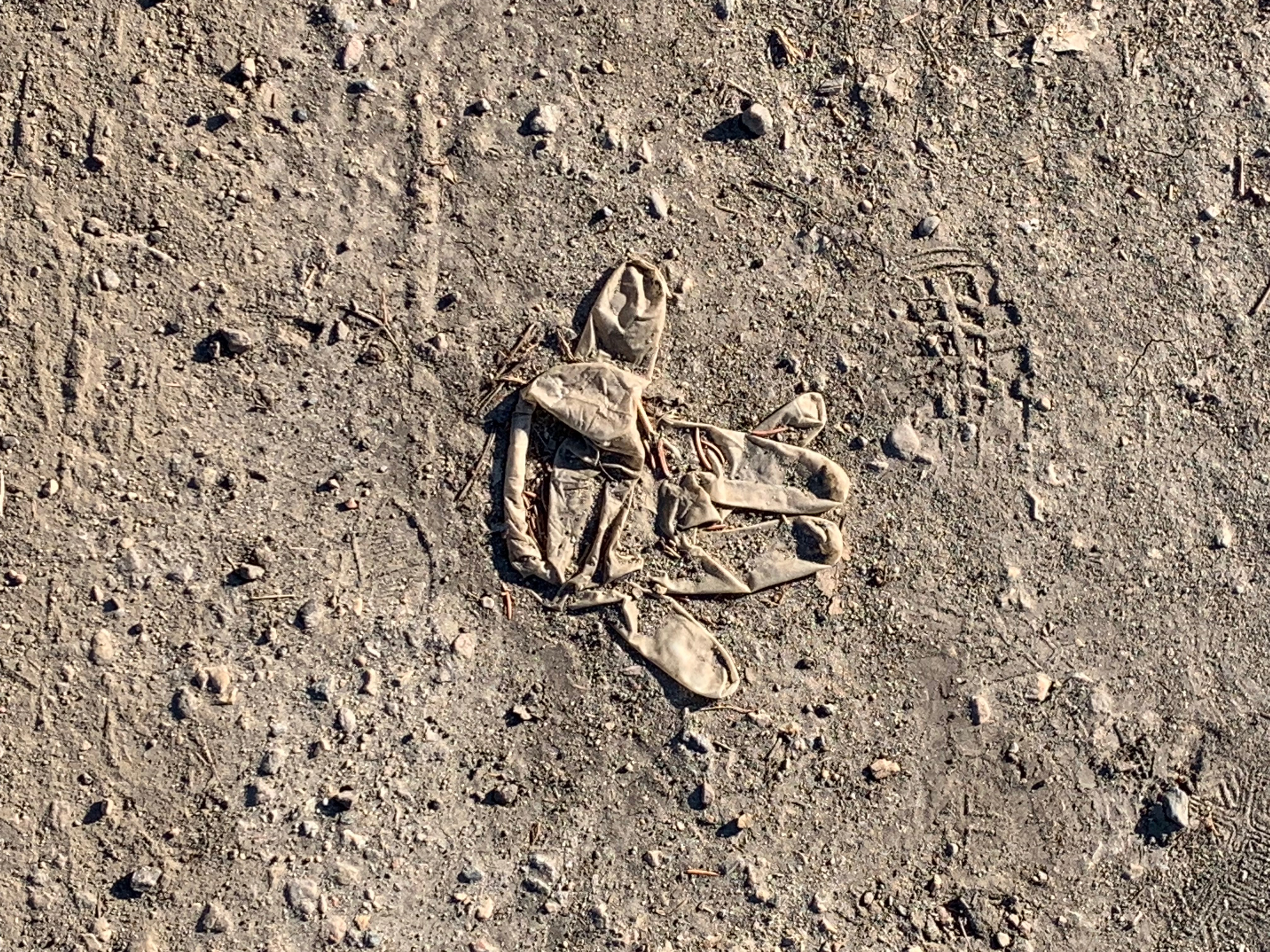 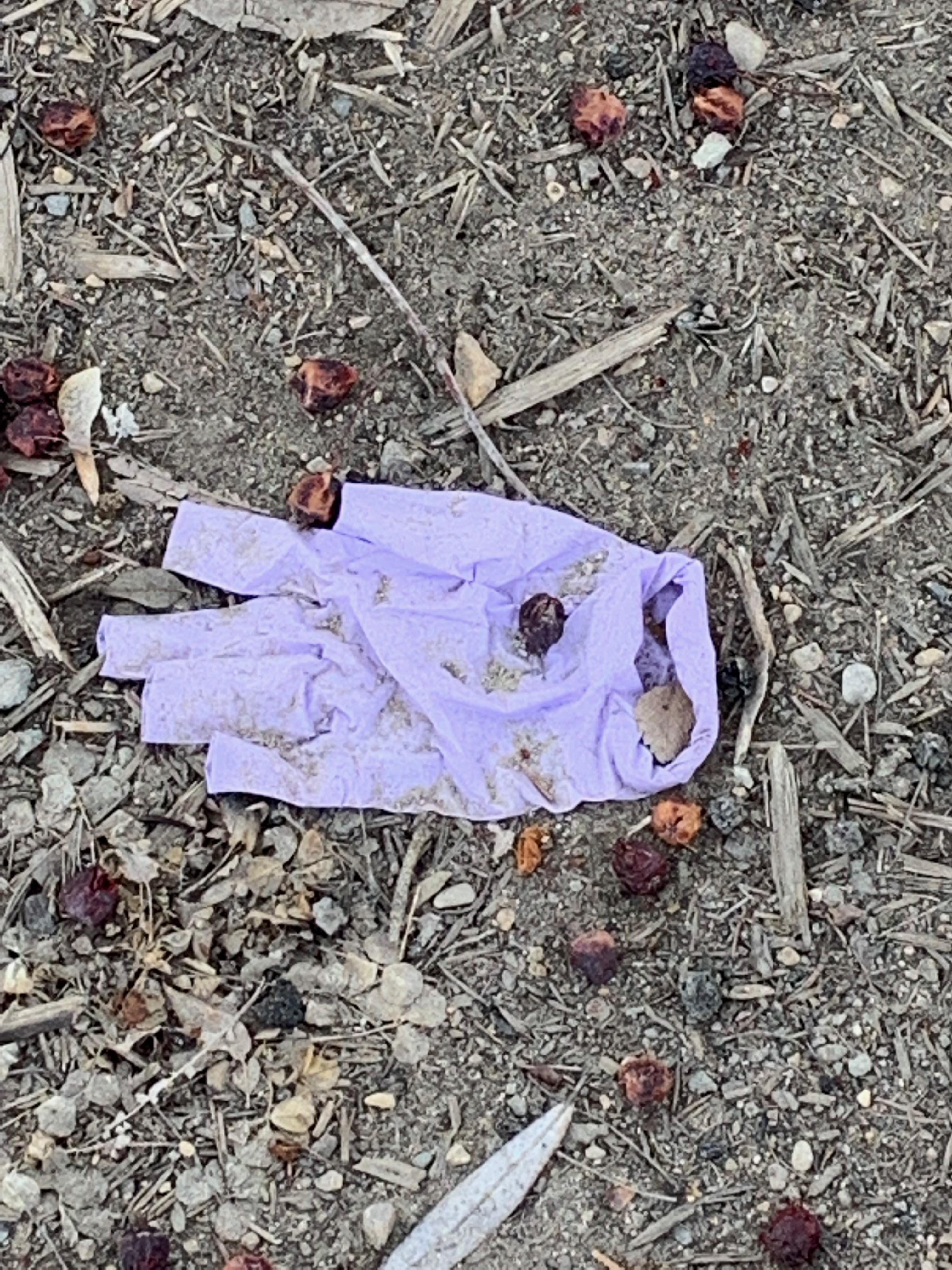 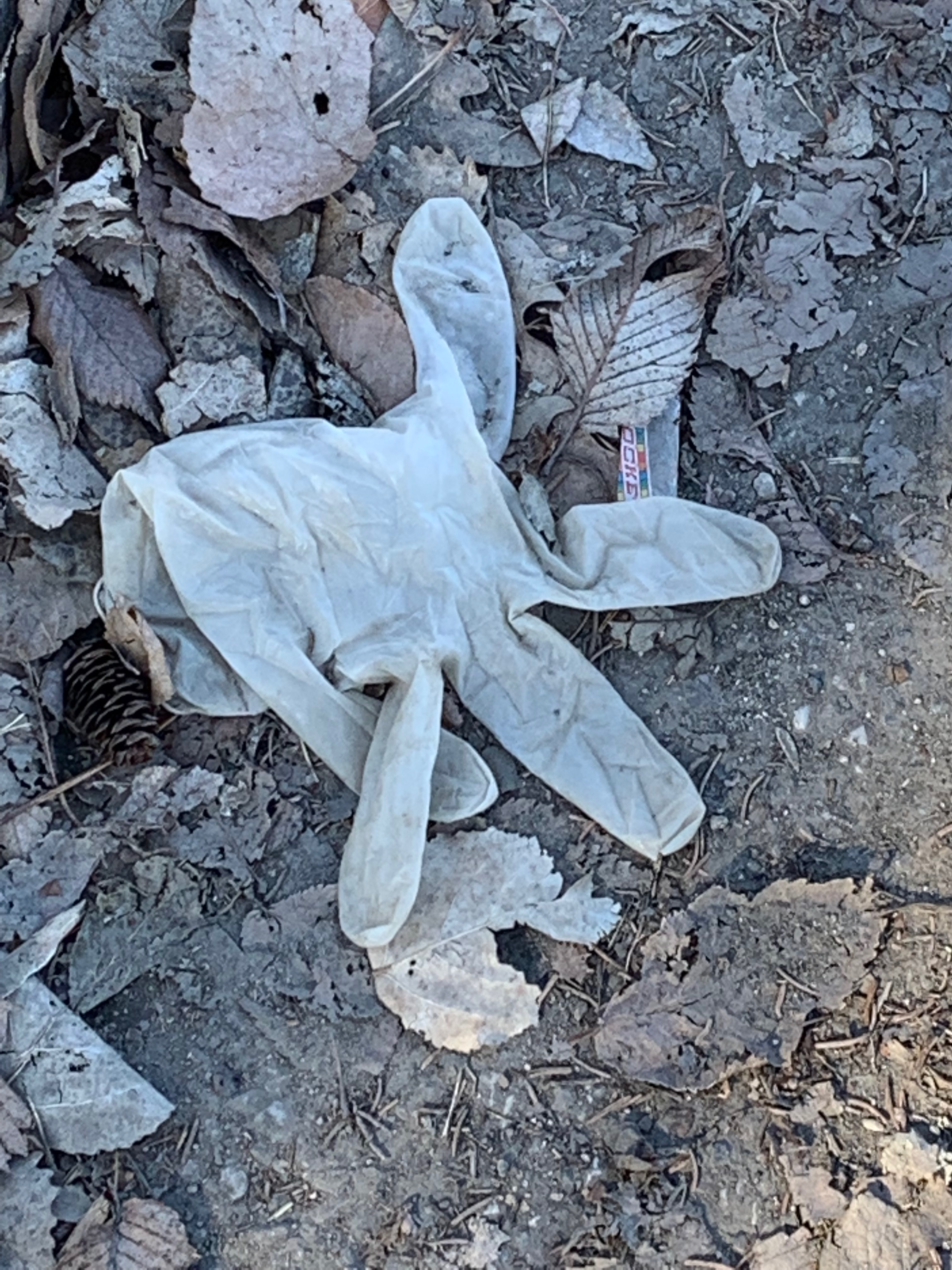 With fewer people around to disturb them, fewer cars to threaten them, the rabbit population has exploded. They usually roam the area in packs, plundering vegetables. I recently purchased a motion-sensing sprinkler that emits a fast-twitch-startling blast of water when it detects rabbit movement in my bean rows. I hope someday to assemble it.

Don’t be fooled by this sedate bunny, plotting under the Amur maple. 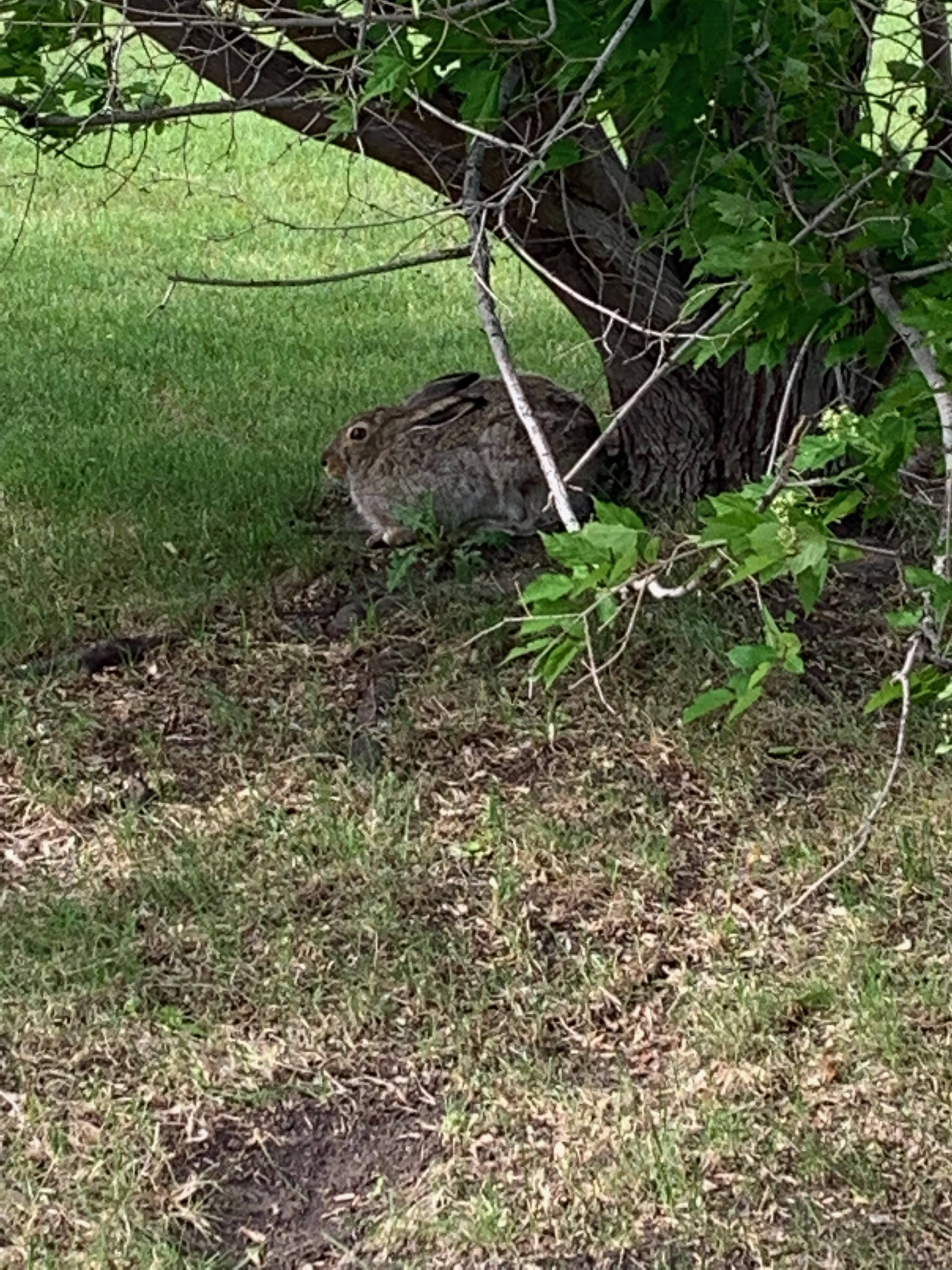 And then there are the two audience-seeking neighborhood ducks. 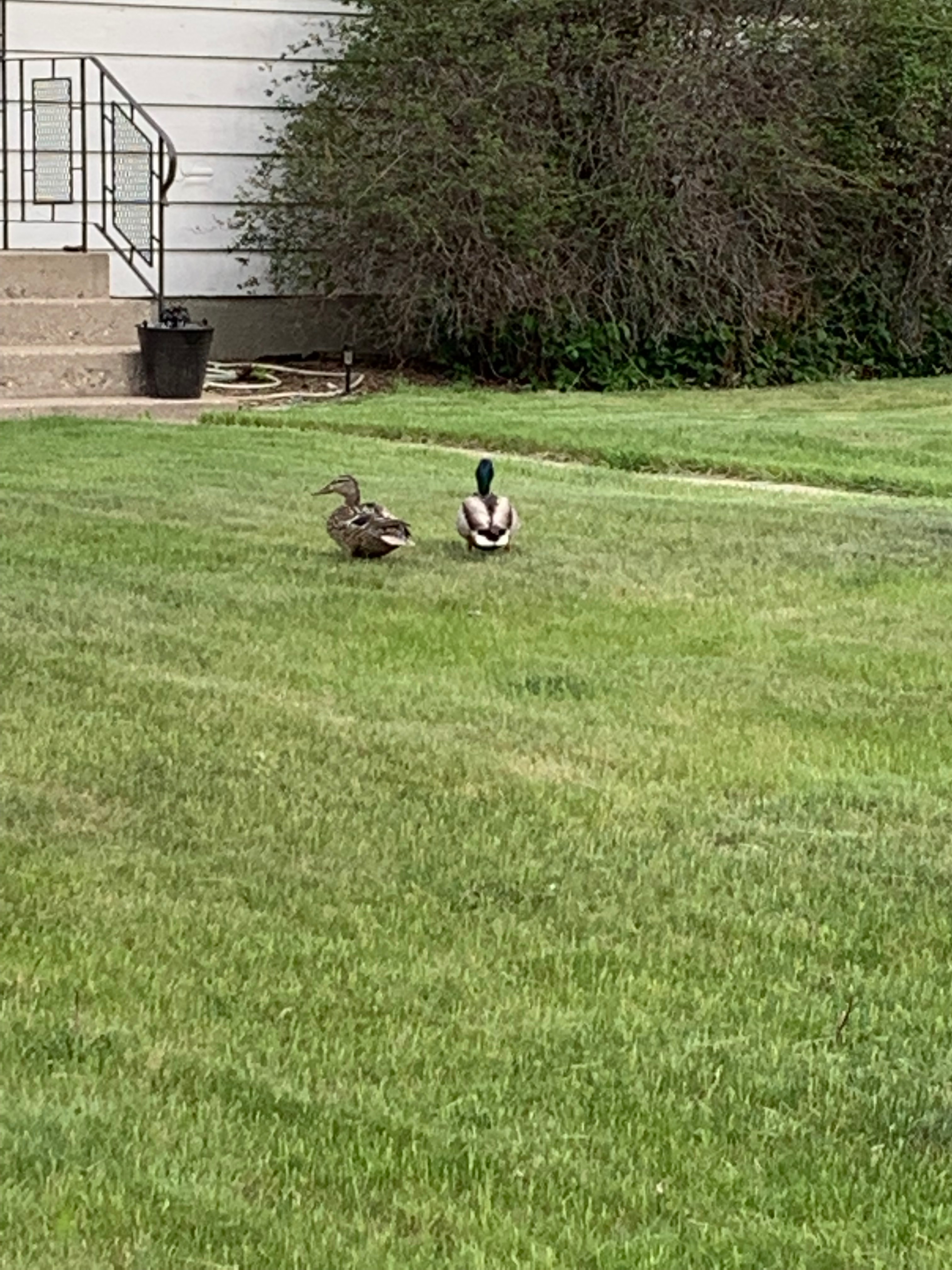 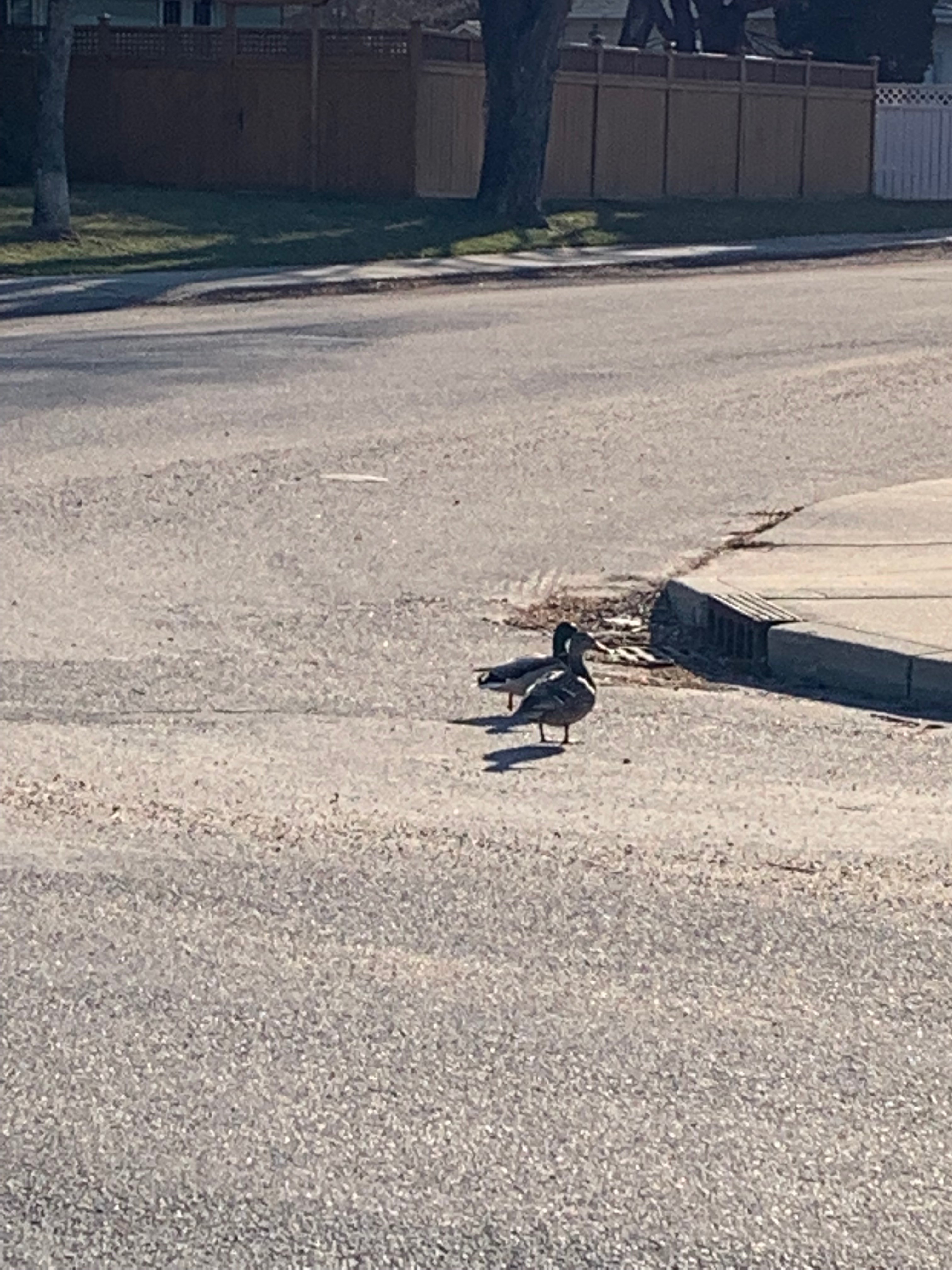 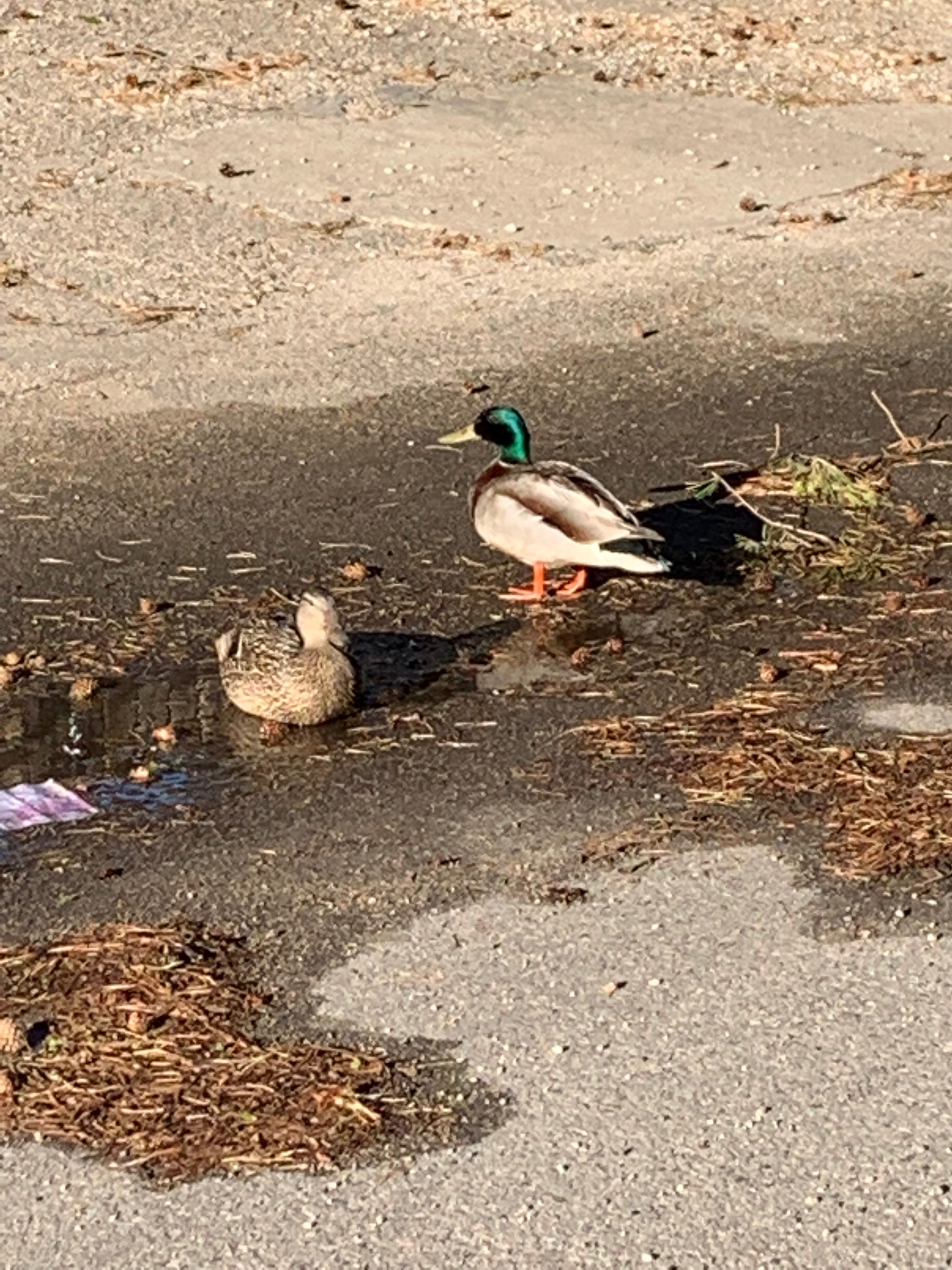 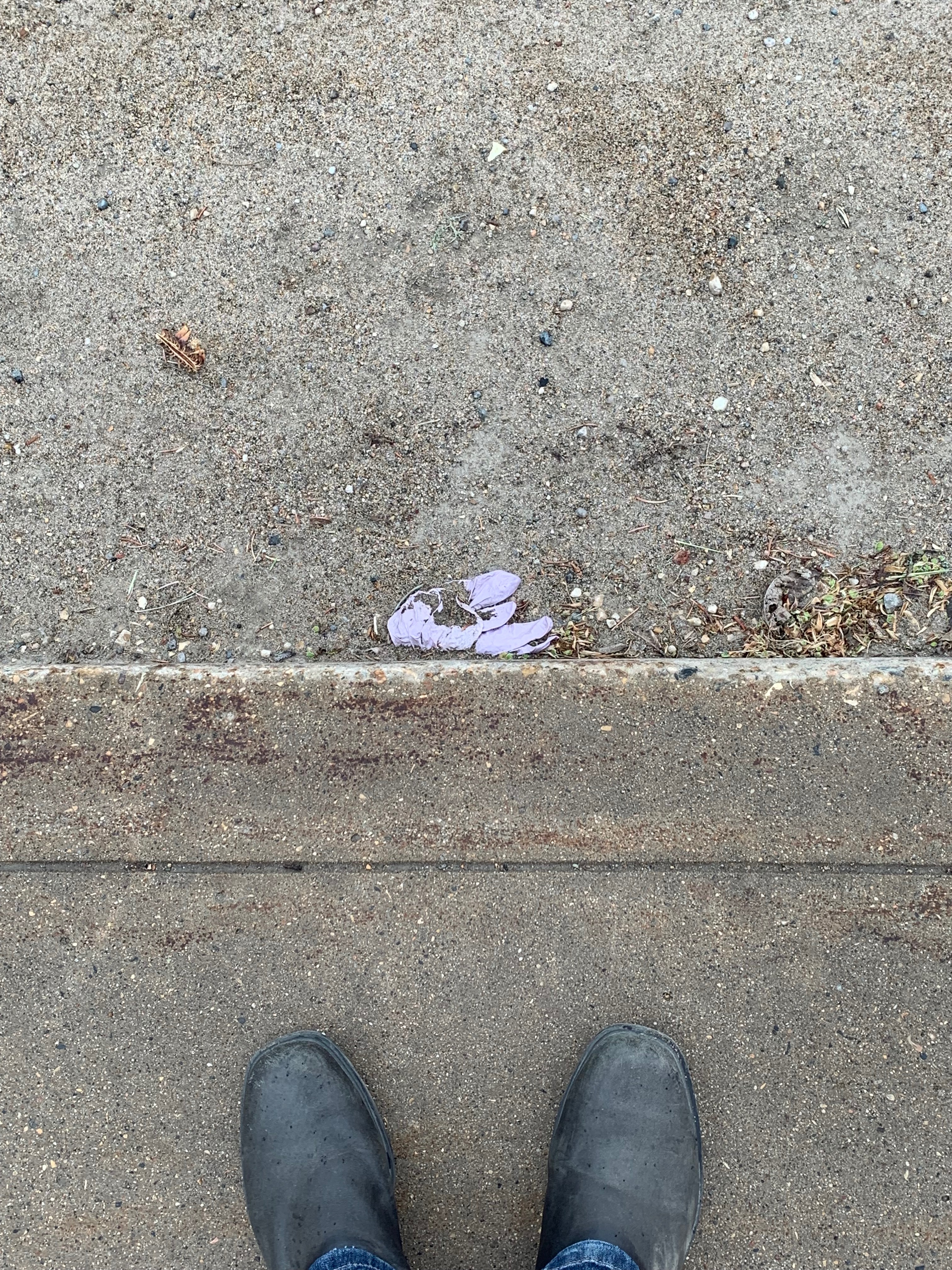 Finally, here are my feet, mid-walk, pondering a mauve glove in a gutter.