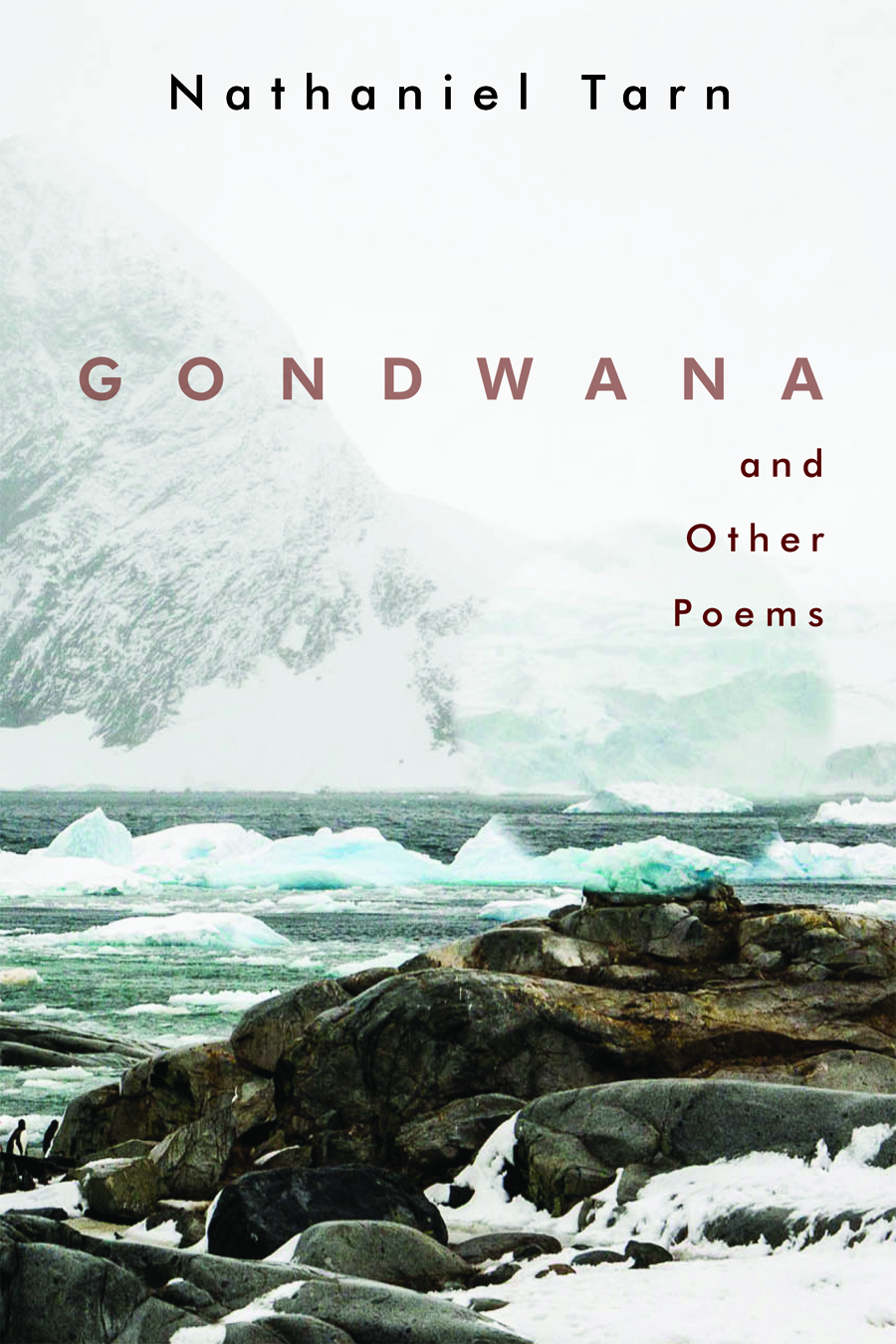 Last week a massive iceberg broke off of Antarctica. This month, ND publishes Gondwana, a new collection of poems by Nathaniel Tarn, named after the ancient supercontinent that broke apart 600 million years ago. We publish the title poem written when Tarn was traveling in Antarctica in 2008.

Their lives / Held in the arms / Of the waves.

Here, now, as ever, going out again
from Finis Terre, final of earth, or
“end of world” they call it here,
consumption left behind.
Earth fragments—first the big islands
cannot be told from earth, then
smaller and smaller islands among
their channels, trees grabbing soil
with weaker roots, until all’s rock where
unimagination starts, where
tempests flare around dread Horn.
Last inhabitants’ blazing canoes
expose their nakedness to last explorers.
This plot begins and ends with past.
But what we name the future follows on.

Earth sinks into mind
sea being mind of earth
in constant movement, constant fretting,
endlessly leaping from thoughts to thought,
waves rolling in from the planet’s belt
greet each other as far-flung kin.
Deep in each trough, thriving unseen,
huge beast obsessions: small
secret beasts; beasts with invading arms
long as your most fearsome nightmares.

Sea lifts its swell into whales.
Smallest speck of foam
is a bird paddling along a wave crest
almost invisible in search of upturn.
How fathomless this is!
What is going on down there,
how far do you drop in the abyss
before feeling ground,
before a basis offers rest again, foothold,
security? Meantime ghosts
of the dead at sea:
circling weather’s homeless
tantalize waves with wing tips
as they go round the endless dip and rise,
cruising cool air. May not alight for years.

Toward center,
center of center,
where earth-mind turns solid,
whereto a single bird
may fly per annum, attracted by
some odor, some phantom odor,
while most, standing, in glossy caucuses
hold a circumference for access to the sea.
A silence there hard to believe, a hazeless,
dustless air when in the clear: a spot
on the farther side of knowledge
from which all other points are North.
Where is your “epilepsy” West,
your “wisdom” East when everything
flies you away from known dimensions
into the stillness? This is no crossing
from a river’s bank to its other side, but
lack of movement absolute,
total attention
to a deliberate deliverance.
The orb has turned all diamond.

Birds melting in and out of waves
caressing tip with tip but never touching them,
bird, beast, eyes peeking out—a quick
look-see and gone again. Ice
opens, closes. Length-wise
black lines of sleeping animal,
Height-wise gray lines of wary bird:
those that fly in sea,
those that swim in air.
Some that flash snow and bathe in snow
white as the ivory light
roll on their backs in snow at times:
black eye, black beak, black foot
signal a presence over white on white.
Some that are checkerboards in black
and white, set your cold eyes to shivering.

The days stretch into years or seem to
for all the world has told us of itself.
Anything new revealed?
High mirrored in a low
has been known forever.
Low rising to a high stays moot.
Sun floating here in mid-floe mist unwilling to climb or fall,
unfurls a panoply of colors.
Mythical grass flashes its green.
Phenomena can all forget forgetting
except the huge electric sea.
Now you imagine days,
similar to days,
days after days uncountable,
days cannot be outnumbered
by any calendric art. They are
a single day—or very few you’ll swear
by lights of the old stars,
and, while innumerable in fact,
these cannot be distinguished.

Domain pitches and rolls:
hearts out of throats,
muscles tightened to lock in breath,
backs slamming up against the bulwarks,
“one hand to ship,” one to your life.
A very tender roll,
soft yet relentless, moving us
from incarnation to incarnation.
You would not think such gentle motion,
a whisper in earth’s circles,
could leave even your mind unbalanced.
But mind escapes like bird into mist.
Perhaps this is your coffin
propelled into white fire
out of one universe into another.

As you reach the great white peak
of the single color,
emotions have been draining
out of your lives.
Naked you go into this continent
in endless search of cleanliness,
exiled imagination’s only host,
until imagination rots.
Catchword “reality” assumes a meaning now,
breath suddenly leaps fast,
distance-devouring clarity
brings all the secrets of the continent
close up against your eyes.
This is the moment of desisting
from human will. Whatever flares:
slide along sea lanes, whitewash away.
With the… no, not the fear of dying, no—
but an immeasurable depth of sadness
for having such a trifling time
to deal with the one hundred thousand things.

[Far back in another dimension,
far as you cannot remember,
all wenches dead, the culture petrified,
dance music curls on flowing flowers:
freeze to the ice of heartbreak and there is such.
Your body may sense it as you move
and step it—yet it’s only dream.
Despised, acclaimed, despised again through over-
hype, you cannot hear it here—
engulfed by silence and immense white air.]

They said back then
there was a frozen continent
in those high latitudes encircles globe.
Are you moving toward it?
Sea overwhelms all distance,
spreads out beyond its cup into space—
there is no other explanation
for how long you have been moving
toward no destination.
You can imagine white
drawing in your colors,
all body differentiae,
until you walk as a ghost,
as someone who has crossed
a limit on no map.
It can be described also
as having crossed to the other side
whether this be a river
or earth-girdler’s self. But,
as you know, there is no crossing.

Is it possible to be overwhelmed
by landscape? Yes. Engulfed? Yes.
Sparagmatized? Broken into shards? Yes.
Sun so blinding in ice facets
borders fade and you enter
what hunters have known for centuries:
silence of silence. No silence on known
ground outsilences this silence.
What is an individual
so spread over so many miles
eyes can’t encompass them?
Eventually you’ll wear
pelts of all animals
you have come far, at such
expenditure of energy,
to witness. Nothing is heard
of the alleged known-world
for however long a time
you come to donate here.

Above leviathan’s songs
can be sensed in your trembling limbs
laments of captive ships,
locked, crushed and,
piece by piece, delivered to the ice—
their dislocated bodies
berthed into other waters than their own.
Everything brought from out. Outside
dissolves. Eyes shut,
the creatures never seem to need to see,
eyes free are globes of melted ice.
Yourself in that beast’s pelt
rests economically on a blue berg,
gazes a moment at the undocumented,
(zodiac pass by!), eyes close again.
Blindly you lead the blind through paradise.

Cruising up channel, whose sides seem to fall in on you, held in a block of time: it could be a cage—but these are walls not bars. No height can be ascribed to the walls. As in a code revealed, white veins blink through black stone, damming your eyesight. Even on cloudless days, rocks climb on up, so measureless, they will outlast your sight and terminate it.

Where the initiating bang unpacked imagination’s jar emptying it once and for all, the jar of one named as all-gifts, all-giving: how falsely named! A small meteorite from our uncounted universes slammed here, name cruelty. No thing, no person spared. Truth that we are at any moment in any time, in any place, less than a hair away from ultimate disaster. Close as the wrist watch on your wrist. In this possession, this epilepsy if you will, mind unfurls (like a great banner of its own freedom while white raises balloons— the weather’s breasts) and will accept its fate. Of all the gifts, kept by an after-thought hope only held the jar.

Coming back to your life, your everyday, the one they call with relish “normal” and how you hate it! Through days of outrageous storm, ship lolling like a drunk, navel in throat, brine coating mouth with its obscene concoctions. Obsession slides, slits waves. Not allowed to move of your own volition but pushed this way and that discretionless, day after day though the roll lasts soft and would hardly seem fierce enough to move a marble from child to child.

Returned from a now known sphere for the first time completely, and thus “at home”, the sphere can never be itself once more. Done to itself in the meantime? You cannot fathom. You have not heard “the news” for all the time away. Suddenly you realize you may not hear “the news” again. This race in its inhuman sadness calls itself human still—but holds no further value. It no longer serves as yardstick for comparisons. The robot’s been switched on. You have seen creatures who, full versed in every ethic, act with such spontaneity that they will never judge. You have been gathered into Eden yet found it full. Your body as a ship is now at rest, yet there is no berth however for you to sleep in.

Purchased by sea you will never walk the same. Lines will never be straight but curve continually in an attempt at straight. This beloved earth loses its strength. Drugs drown ultimate coral colors; krill devolves into mud; animal flesh, slashed open to its innards, washes to liquid pinks: diluted wine. Shit pink, you stink among dry corpses, your guts groped at by scavengers. Much precious ice washes away to sea never to startle cloud again. Waves flush out of your pockets, pant-bottoms, mouths and ears—your bones reclaimed in full by foam.

The tallest universal star, cloud-born, earth raised beyond the highest suns: one single goddess for humankind, one sole divinity for our necessity: salvage no other! worship no other, turning all ritual to work! She walking out from loss, dying, dead, she who obliterates all other gods, now comes to life again, now smiling breathes, entices. You meditate by warm streams while molting— streams you sang beside as your city perished, paddle breathlessly instead of flying, sound like every being except yourself, experience the ultimate in solitude. The robot has been terminated. After some seeming centuries the northward-pointing cross collapses, all our directions open free. Your heart, once given to embalmers in the empires of _Finis Terre, _suddenly homes with you to mate again