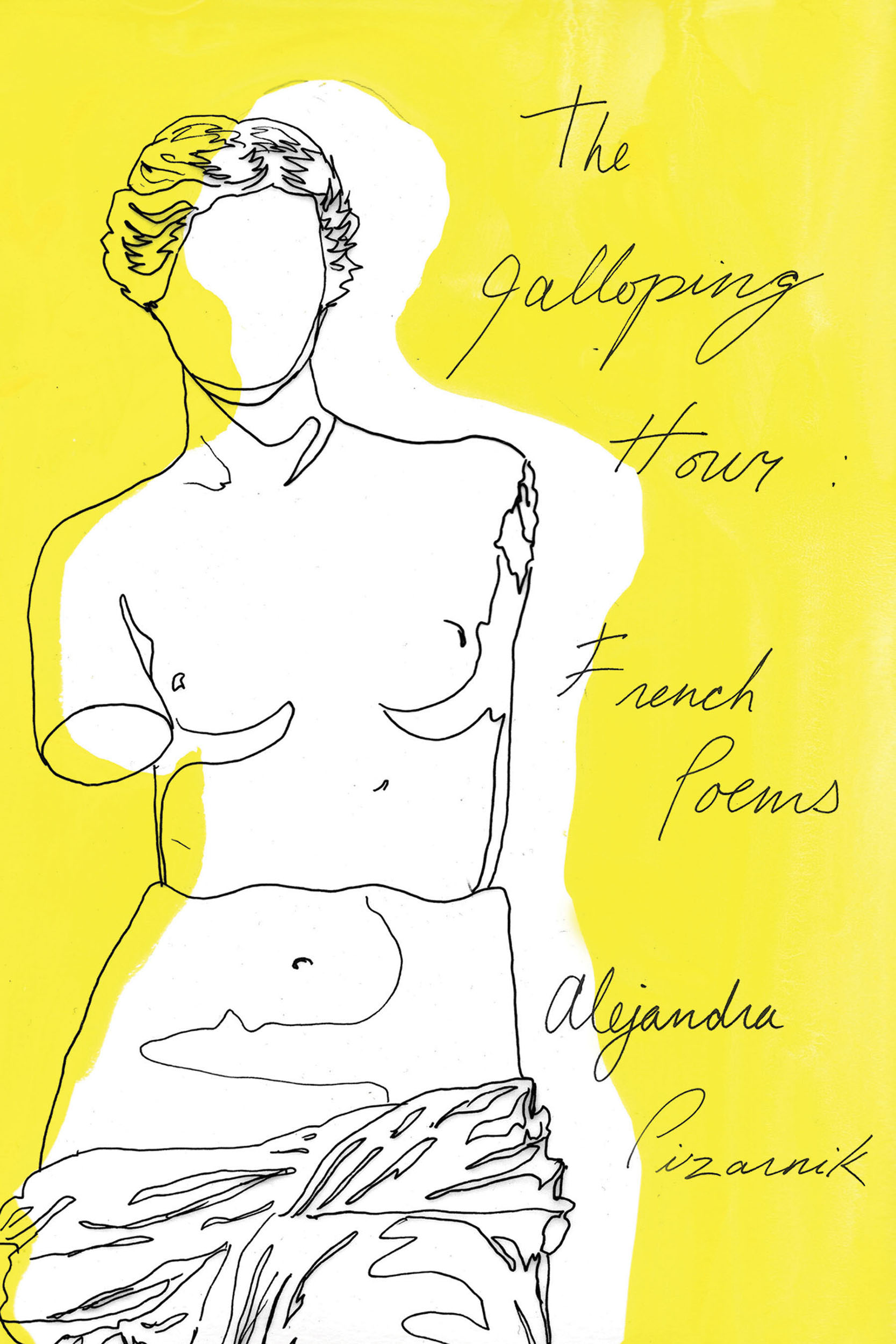 NOTE ON THE EDITION

by Patricio Ferrari, editor of The Galloping Hour

The Galloping Hour: French Poems is the first edition in book form (and most complete to date) of Alejandra Pizarnik’s French poems and art work. For this edition, I consulted the entire Pizarnik archive held at Princeton University, two small private collections (the Miriam Pizarnik Collection and the Ivonne Bordelois Collection) in Buenos Aireas, and part of Pizarnik’s personal library housed at the Biblioteca Nacional de Maestros [National Library of Teachers] in Buenos Aires.

The earliest reference to the poemas franceses [French Poems] as an integral part of the Pizarnik Papers dates from 2008 (Patricia Venti, Bibliografía Completa de Alejandra Pizarnik, Madrid, Del Centro Editores, p. 29). In April 2009, at Princeton, I transcribed the then unpublished poemas franceses and other French materials I located in the archive. On May 25, 2010, invited to the seminar Bilinguisme, double culture, littératures at the University of Nice-Sophia-Antipolis, I presented a paper in which I argued that it was necessary for these materials to be published (Ferrari, “Pour une édition critique des poèmes français de Fernando Pessoa et d’Alejandra Pizarnik,” Traversées poétiques des littératures et des langues, Maria Cristina Pîrvu, Béatrice Bonhomme, and Dumitra Baron, orgs., Paris, L’Harmattan, 2013, pp. 423-50). Prior to this event, I shared my research with Cristina Piña, who, shortly thereafter, was commissioned by La Revue de Belles-Lettres in Switzerland to introduce and publish the thirteen French texts included in Part I of the present edition (Piña, “Los poemas franceses,” La Revue de Belles-Lettres, vol. 2, Lausanne, 2011, pp. 93-117). Except for the etching (reproduced in facsimile by Mariana Di Ció, Une Calligraphie des ombres. Les manuscrits d’Alejandra Pizarnik, Saint-Denis, PUV, 2014, pp. 102-103), the French texts in part II and the drawings have never been published before.

Since this isn’t a critical edition, neither signed variants nor editorial interventions are indicated. The same applies to discrepancies with Piña’s transcriptions. The punctuation of the original texts has not been altered.

The section of notes below includes the archive call number of each document, the type of document (manuscript [ms.], typescript [typ.], or mixed), the number assigned by the author, and date or approximate date [circa] of the document. The notes also include the archive location of Pizarnik’s Spanish translations of eight of her French texts, a few source texts of the French originals, and some cross-references in her published and unpublished poems.

1. Et quoi penser du silence? | And What to Think of Silence?

(Box 6 Folder 28). Ms. circa 1962, numbered “1” by the author. This folder contains Spanish self-translation titled “Desfundación” [Disfoundation] (circa 14 June 1967). An eponymous poem included in Extracción de la piedra de locura [Extracting the Stone of Madness] (1968) may be traceable to this French text.

2. Si pour une fois de nouveau | If for Once Again

(Box 6 Folder 28). Ms. circa 1962, numbered “4” by the author. This folder contains two Spanish self-translations. The latest one reproduced in facsimile by Di Ció (2014, p. 288). A third (earlier draft) of the self-translation figures in a diary entry dated 14 June 1967 (Box 2 Folder 5). This entry serves to date the period during which Pizarnik returned to her French poems. Along with this draft we find other earlier self-translation drafts of texts no. 7, 8, and 10 (Box 2 Folder 5, pp. 1-3). “Linterna sorda” [Deaf Lantern], included in Extracción de la piedra de locura [Extracting the Stone of Madness] (1968), and “Sous la nuit” [Under the Night] (French title in the Spanish text), posthumously collected in Textos de sombra y últimos poemas [Shadow Texts and Last Poems] (1982), can be traced to this French text.

(Box 6 Folder 28). Mixed. Dated 2 September 1963, numbered “6” by the author. The French quote was extracted from “Dans un pays d’enfance…” [In a Country of Childhood…], poem by Oscar Vladislas de Lubicz Milosz (1877-1939), Lithuanian-French poet, playwright, and essayist (born in Mogilev; today Belarus) (Poèmes, Paris, Fourcade, 1929, pp. 17-18). This and other lines from Poèmes are copied in Pizarnik’s green notebook (pp. 6-8). Pizarnik penciled the first syllable of her name (“Al”) next to lines 1-2, 7-8, 19, 20-23 and the four syllables (“A-le-jan-dra”) next to lines 11-14 to indicate which ones she authored. The name Jeannine may refer to Marie-Jeanne Noirot, who Pizarnik befriended in Paris between the end of 1961 and the beginning of 1962 and with whom she kept a correspondence after returning to Buenos Aires in 1964. Arta may be a pseudonym used by Noirot. In a letter to Pizarnik from April 1965, Noirot excuses herself for employing “paroles brutales qui sont plutôt le style de Harta” [brutal words in the style of Harta] and that Alejandra, as she writes in the missive, does not seem to appreciate (Box 9 Folder 3). In 1968 Pizarnik dedicated to Noirot “En un otõno antiguo” [In a Distant Fall], a poem included in Extracción de la piedra de locura [Extracting the Stone of Madness] (1968).

(Box 6 Folder 28). Ms. circa 1962, with autograph rubric “Poemas franceses” and sequence letter “b.” This folder contains Spanish self-translation titled “Palabras del viento” [Words of the wind] (post 14 June 1967). An earlier version of the self-translation, datable to 14 June 1967, figures in the same diary along with other early self-translation drafts of texts n.o 4, 8, and 10 (Box 2 Folder 5, pp. 6-7). Lines 3-4 of poem 14 in Árbol de Diana [Diana’s Tree] (1962) echo a passage from this French text. The only text marked “a,” extant in this folder and that opens “Un gesto, una sombra” [A gesture, a shadow], is likely a ms. Spanish self-translation of a French text “a” which I have not located in any of the Pizarnik archives. Interestingly, a later ms. of the Spanish version labeled “a” exhibits the following note: “Escrito en francés en 1962” [Written in French in 1962] (Box 3 Folder 8, pp. 9-10). This Spanish text “a” contains echoes from Germain Nouveau’s “Le Baiser (III)” [The Kiss] in Valentines et autres vers, Paris, A. Messein, 1922 [1885]); the missing French text is at the origin of “Signos” [Signs], a poem included in El infierno musical [The Musical Hell] (1971). Pizarnik copied lines of this poem by Nouveau into her green notebook (p. 3).

(Box 6 Folder 28). Ms. circa 1962, marked “c” by the author. This folder contains a Spanish self-translation titled “Desnuda” [Naked] (circa 14 June 1967). A previous ms. version of the self-translation, datable to 14 June 1967, figures in the same diary as an early self-translation draft of texts n.o 4, 7, and 10 in this edition (Box 2 Folder 5, p. c.). There exist two other ms. versions in Box 7 Folder 29 and two in Box 3 Folder 8 (pp. 14-15) with the autograph note “Traducido del francés” [Translated from French]. “Memorial fantasma” [Ghostly Memorial], published in the Spanish Review Papeles de Son Armadans (n.o CLXX, Madrid-Palma de Mallorca, May 1970), and included in the posthumous collection Textos de sombra y últimos poemas [Shadow Texts and Last Poems] (1982), can be traced to this French text.

10. Je te cherche dans le vent | I Check for You in the Wind

(Box 6 Folder 28). Ms. circa 1962, marked “d” by the author and followed by a question mark indicating doubt, possibly regarding the order of the sequence. This folder contains a Spanish self-translation titled “La noche, la niebla, la infancia” [Night, Fog, Childhood] (circa 14 June 1967). A previous ms. version of the self-translation, datable to 14 June 1967, figures in the same diary as early draft self-translation of texts n.o 4, 7, and 8 in this edition (Box 2 Folder 5, p. d).

Another list of words employed in this French poem, penned on other half of cut-out paper where this French poem was written, but located in a different box in Pizarnik’s archive (Box 4 Folder 9, p. 138) reads:

27. La volonté de tristesse | The Will to Sadness

28 Je me rappelle le vent | I Recall the Wind